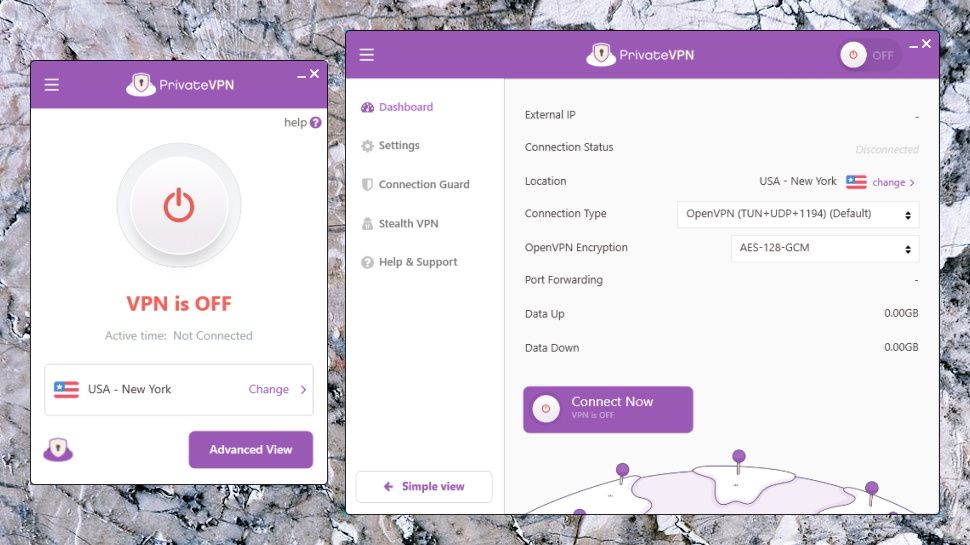 PrivateVPN is a Swedish VPN service that may seem basic in some areas, but has some amazing and unusual features.

The network is relatively small, with 63 countries and "200+ servers" (providers like ExpressVPN and NordVPN have thousands).

But torrenting is supported everywhere, and you get easy-to-use clients for Windows, Mac, iOS, and Android, plus setup instructions for routers, Linux, and more.

The company does not support WireGuard in its applications at this time (although you can download configuration files to configure it manually). But there's a lot to like elsewhere, including support for OpenVPN, L2TP, and IKEv2, a stealth mode to bypass VPN blocking, port forwarding support, system- and application-scale kill switches, protection against DNS and IPv6 leaks, and the ability to connect. up to 10 devices simultaneously.

PrivateVPN claims that it does not outsource support and when it has problems, it speaks directly to the developers.

You probably don't take all VPN websites at face value, and neither do we. But PrivateVPN has a surprisingly good reason that you should pay attention to. A Trustpilot rating of 4.9 makes it "the world's most trusted VPN provider," according to the company. This is not a 100% guarantee of good service, but it is a strong indication that PrivateVPN delivers on its promises.

Still not convinced? Try it. PrivateVPN has a simple free plan that gives you 10 GB of data per month and a choice of 12 locations. There's no streaming support, but speeds aren't capped, you can use P2P, and it's easy to explore the service and see how it works for you.

Pricing beats most at €8.99 billed monthly, or the equivalent of €6 if you pay three months in advance. Opting for the annual plan gets you an extra two years free at €2 per month, though it renews every year after that at an above-average price of €6 per month.

At the time of writing, the PrivateVPN website claims that you can get a 7-day free trial. The Start Trial link actually points to a separate purchase page with different prices. The monthly plan here is more expensive at €10, but it also gives you 3 months free when you sign up. It's not exactly what we call a trial, but it's four months of protection for just €10, which works for us.

If you're already convinced, the annual plan on this page also gives you two bonus years for the first term, and is slightly cheaper at €1.67 per month.

Whichever option you prefer, you're protected by a 30-day money-back guarantee. Be careful though: this only applies to new customers and you must give a reason for requesting a refund. 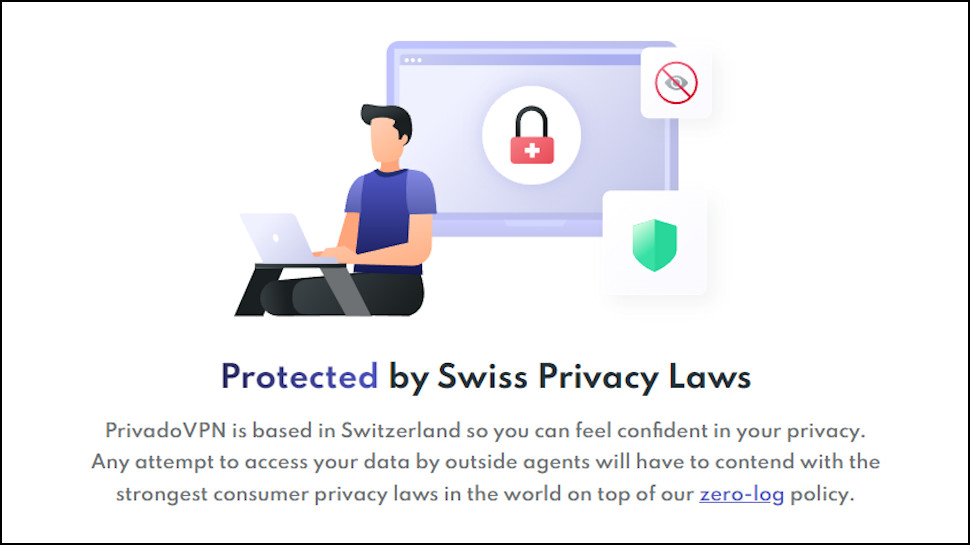 PrivateVPN says it doesn't keep logs of its users' online activity, but we'd still like to see the service undergo an independent audit (Image credit: PrivateVPN)

Does PrivateVPN keep logs? The privacy policy is categorical: "We do not collect or store logs of your activity, including browsing history, traffic destination, connection timestamps, DNS queries, IP addresses (neither the assigned IP nor the connected IP), data content or bandwidth.

The rest of the privacy-related fine print looks a lot like most other VPNs. PrivateVPN only has your email address, uses cookies on the website, and may use third-party analytics, but there are no signs of data sharing or other questionable activity.

While this is good news, potential customers still need to be convinced that PrivateVPN delivers on its promises. Many providers are now subjecting their systems to public safety and privacy audits, giving users real, independent evidence of what they are doing, and we hope more VPNs will do the same. 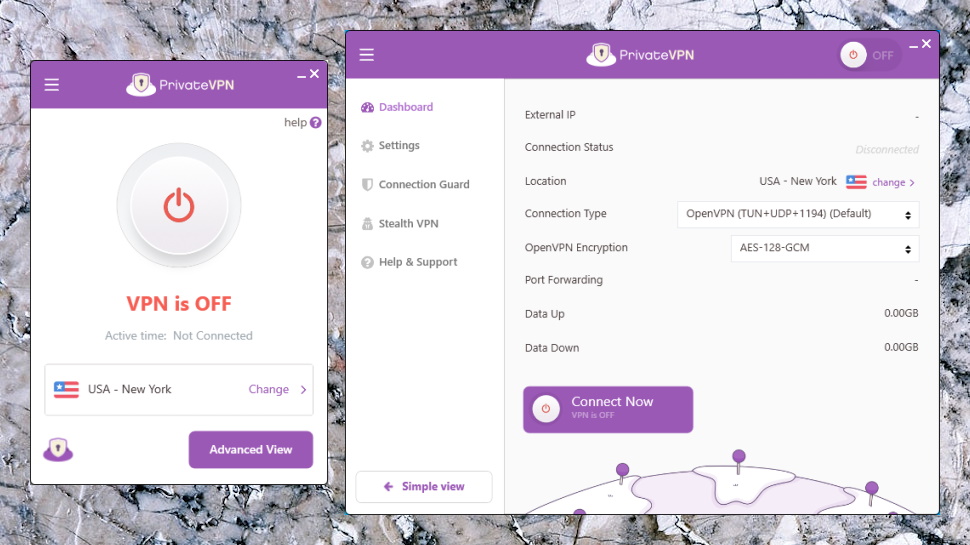 The PrivateVPN Windows app opens with a very simple interface, covering only the VPN essentials. The current location is highlighted and you can choose another one from the list. A large on/off button turns on and off as needed, and there's a menu button with help and account links. Everything is very simple, and anyone with previous VPN experience will immediately feel at home. 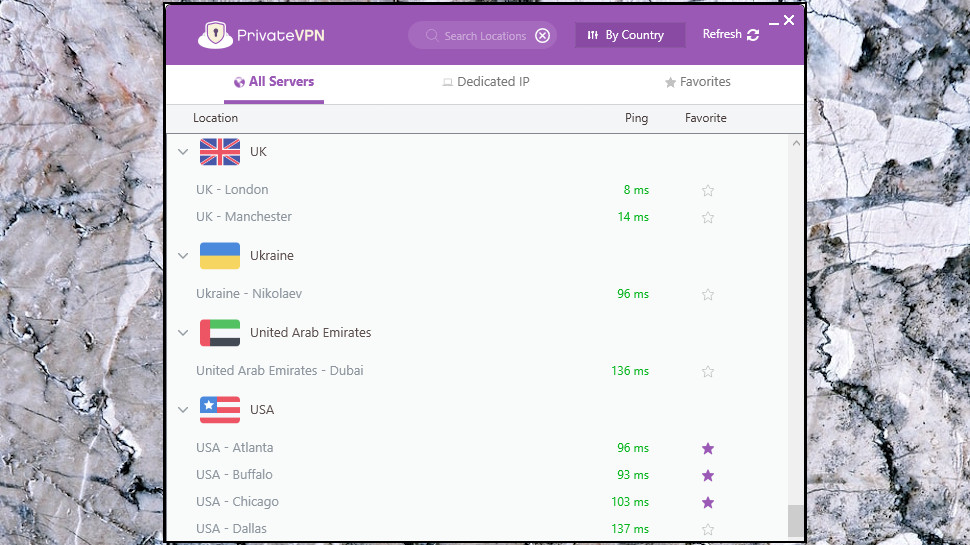 Along with all your available servers, PrivateVPN also shows you their ping times (Image credit: PrivateVPN)

Dig a little deeper, though, and there are some cool features here. The app doesn't just present locations as a plain text menu, for example. These are listed in a separate window, with cities already visible (no need to expand the country lists individually), and ping times to indicate their distance. You can sort them by name or distance, use a search box to find a specific server, or save your most used locations as favourites. And there is a separate panel for dedicated IP slots. 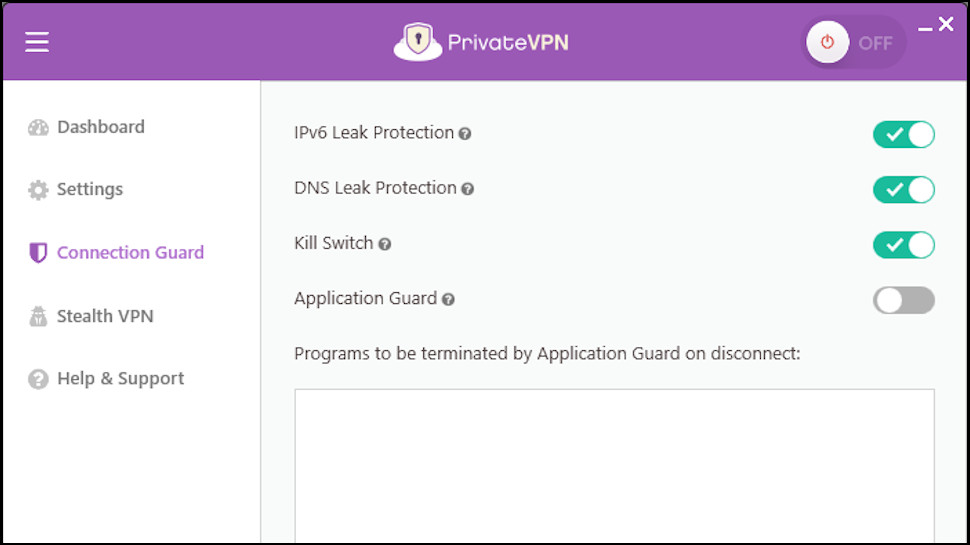 You can change your VPN protocol, enable two kill switches, and more in the PrivateVPN settings (Image credit: PrivateVPN)

This is just the beginning. The app opens with a simple and clean console, but click the Advanced View button and it expands to give you many more functions and features.

You can choose the protocol (OpenVPN TUN, TAP, TCP and UDP, L2TP, PPTP) and OpenVPN encryption method (AES-128/256-CBC/GCM) directly from the console. Not the ideal list: we wish WireGuard supported the app, and PPTP is so insecure that most VPNs have dropped it, but it gives you more control of OpenVPN than some providers. 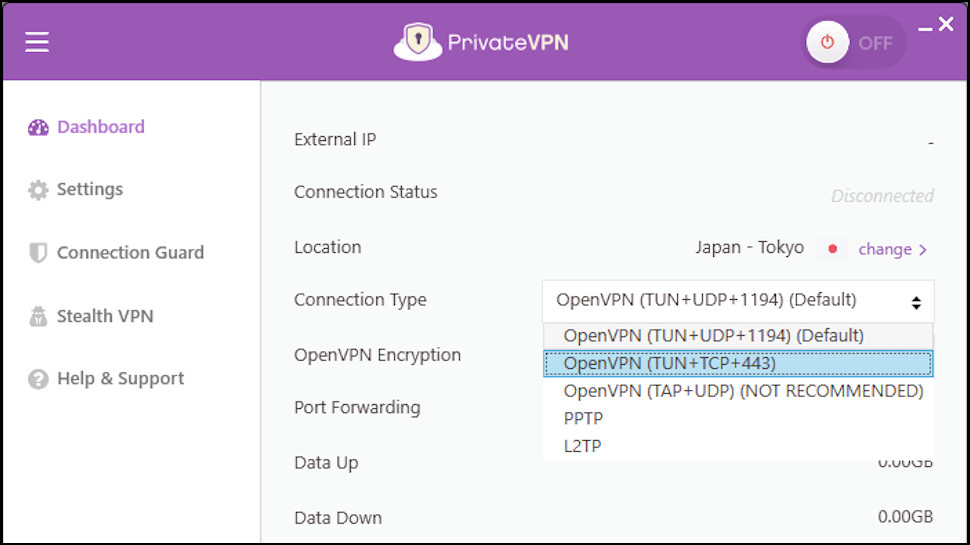 Unfortunately, WireGuard is not compatible with the Windows client (or any of the apps) (Image credit: PrivateVPN)

A connection protection feature combines several technologies to protect your privacy: DNS and IPv6 leak protection, as well as a system-wide and application-level kill switch to protect you in the event of a VPN outage. (You can configure the system to automatically kill your P2P client if the tunnel goes down, for example).

A stealthy VPN feature aims to help you bypass firewalls and get online, even in countries that don't support VPNs.

The app can install or repair your Windows TAP adapter, often a useful way to troubleshoot connection issues. And if that doesn't work, you can browse the app's log files or click a link to open a live chat session on the PrivateVPN site.

It's a solid set of features, but there are some features you might miss out on. There are no split tunnels, for example, no multi-hop VPN, and no "auto-connect when accessing untrusted networks," which we often see with lesser apps.

There's still enough functionality here to make the interface cluttered in places, and users won't necessarily understand all the technical terms. But the app's dual-interface approach means it's not a major issue. If you just need the VPN basics, stick with the plain view and you never have to worry about low-level complexities. But if you need more, advanced features are just a click away. 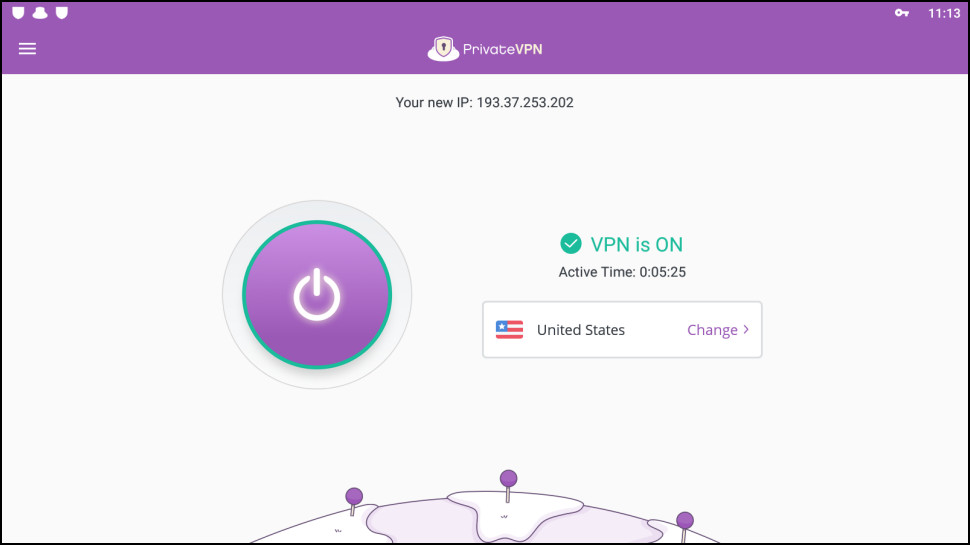 PrivateVPN is pretty much the same on tablets, phones, and Macs (Image credit: PrivateVPN)

PrivateVPN's Mac app is very similar to the Windows version, with a simple opening window, a list of eligible locations with favorites, and an advanced view for advanced users.

Look closely and you will notice some differences. The location list doesn't show ping times for each server, for example, and the Mac app lacks some Windows options (no configurable DNS leak protection or kill switch in the app).

It's still a great and easy to use app with great features in its kill switch and IPv6 leak protection. But it doesn't have enough power to compete with the best of the Mac competition.

PrivateVPN mobile apps ditch the simple and advanced desktop views in favor of a simple and unique interface. It works well and looks a lot like the rest of the range, although there are some additional differences in functionality.

The Android app is the more powerful of the two, with a kill switch, OpenVPN support, IPv6 leak protection, and Stealth VPN features. If there is a downside, it is that there is no support for other protocols.

Overall, it's a decent range of apps that look good and offer more than the basics of VPNs. But like the Windows app, PrivateVPN lacked WireGuard support, split tunneling, "auto-connect when accessing untrusted networks," and some of the more advanced features we often see elsewhere. The kill switch is well implemented and lets you know what's going on when it's activated (Image credit: PrivateVPN)

PrivateVPN's Windows app performed its main tasks well. Connection times were generally 4-8 seconds, which is very reasonable for an OpenVPN application. Desktop and audio notifications let you know when you're protected and when you're not. The app interface generally worked as expected and we didn't encounter any issues.

The kill switch did a great job in testing. We used different methods to close the VPN connection, including simulating a software crash, but the app ignored all our efforts, crashed our internet, and immediately started reconnecting.

Many VPN apps activate their kill switch without notifying the user, which means the internet goes down for no apparent reason. PrivateVPN handles the situation much better, displaying an informative alert to explain that the VPN is down, internet access is blocked by the kill switch, and the user needs to close the app, disable the kill switch, or reboot the device to recover. . In short, exactly what you need to know.

The results of our leak test weren't that impressive. Running multiple tests from multiple sites showed no signs of DNS or other leaks…