The AMR5 was originally promoted on Kickstarter, which is what this platform was not built for. In its original form, it used a lower-spec AMD processor, but has now been revamped to a retail product using an AMD Ryzen Class 5 processor.

Where it differs from the typical Mini PC is that it doesn't use the Intel NUC case model, instead choosing a uniquely free-standing design that's meant to sit on a desk or TV stand. .

As mini-systems, this is a reasonably powerful system, with a six-core, twelve-thread CPU, Radeon GPU, and plenty of RAM pre-installed. The owner can control exactly how this translates to performance, as the power button rotates to select 'Quiet', 'Auto' or 'Performance' modes.

In auto mode, system speed is balanced by fan RPM, allowing it to increase if the system requires more cooling.

Your chosen mode is easy to see as the power button is backlit with LEDs in specific colors for each option, and the case also features animated RGB LEDs for a festive experience.

Our only reservation about the flashing lights is that, sadly, there doesn't seem to be any hardware or software way to control them.

What stands out about this design is that it is very easy to upgrade and accessing the internal parts does not even require tools. The right side of the case is only held together with a few plastic tabs and magnets, making it easy to access.

Two SODIMM memory slots and two M.2 NVMe storage slots can be swapped or expanded. Increasing the amount of RAM from the standard 16 GB to a maximum of 64 GB simply requires changing SODIMMs. Conversely, the default 512GB SSD can be increased to 2TB via hot swapping, and an additional drive can be added to double that amount.

There are some material aspects that a buyer has to deal with. The first of these is that due to the two M.2 slots, the number of PCI lanes for USB was limited. There are five USB ports, but only one is USB 3.2 Gen 2 and the others are Gen 1.

And while it's technically possible to connect three monitors to the AMR5, the integrated GPU isn't powerful enough to drive all of them at once at the highest resolutions.

Acemagic's promotional material implies that the AMR5 would make a good gaming rig, and we'd only agree to that if the games you're playing have very modest requirements and you're willing to use lower resolutions and detail settings.

For the price, the AMR5 is a very good system that has more than enough power for general computing tasks and multimedia services. 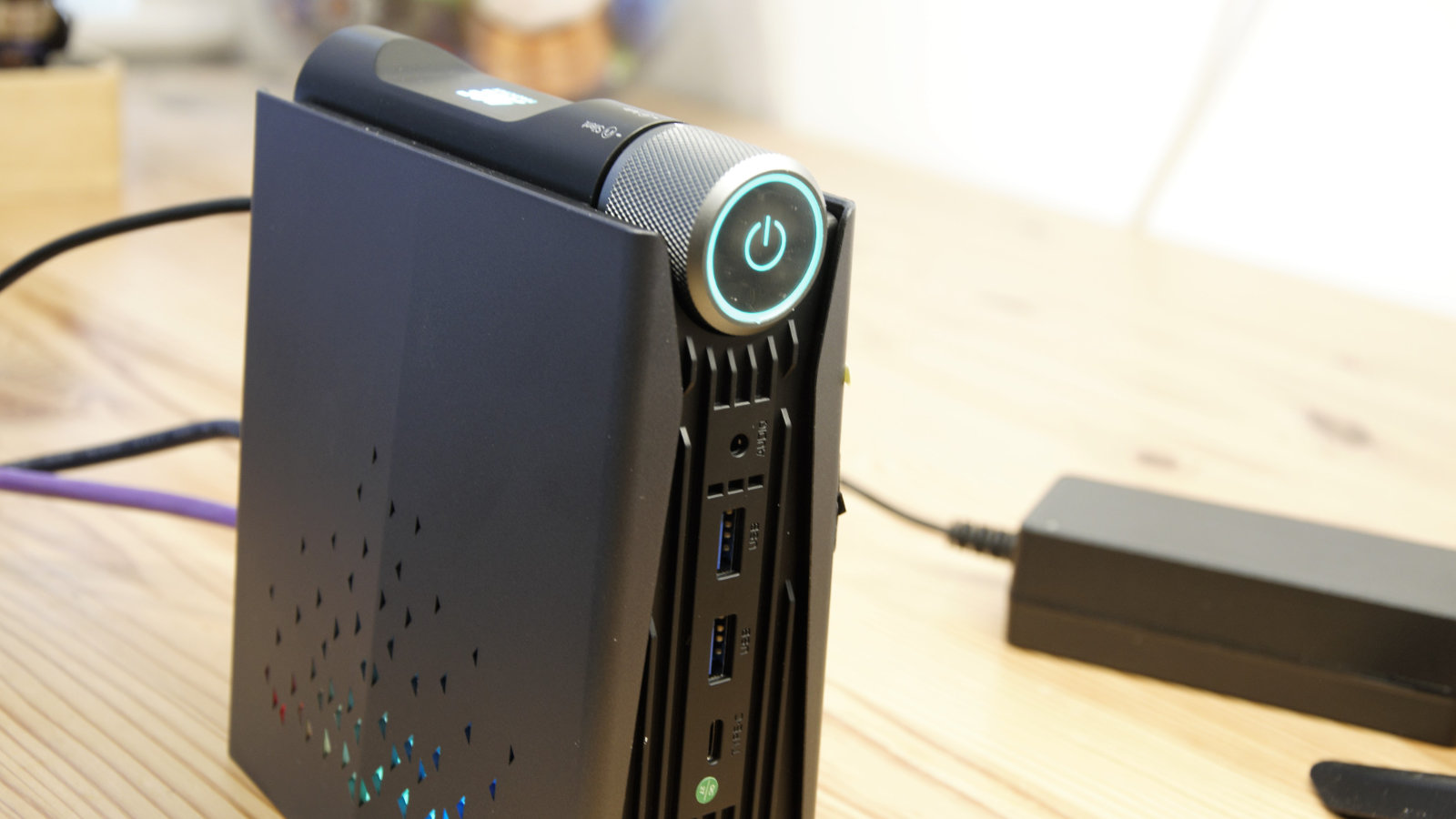 Here is the Acemagican AMR5 setup submitted to TechRadar for review:

Depending on where you get the AMR5 in the world, the price can fluctuate wildly.

At Amazon.com, US customers can pay €424, but European shoppers will find it to be closer to €600 for the same hardware through Amazon.co.uk.

While it may take longer to arrive from AliExpress, the cost savings compared to Amazon and other overnight delivery retailers are significant. 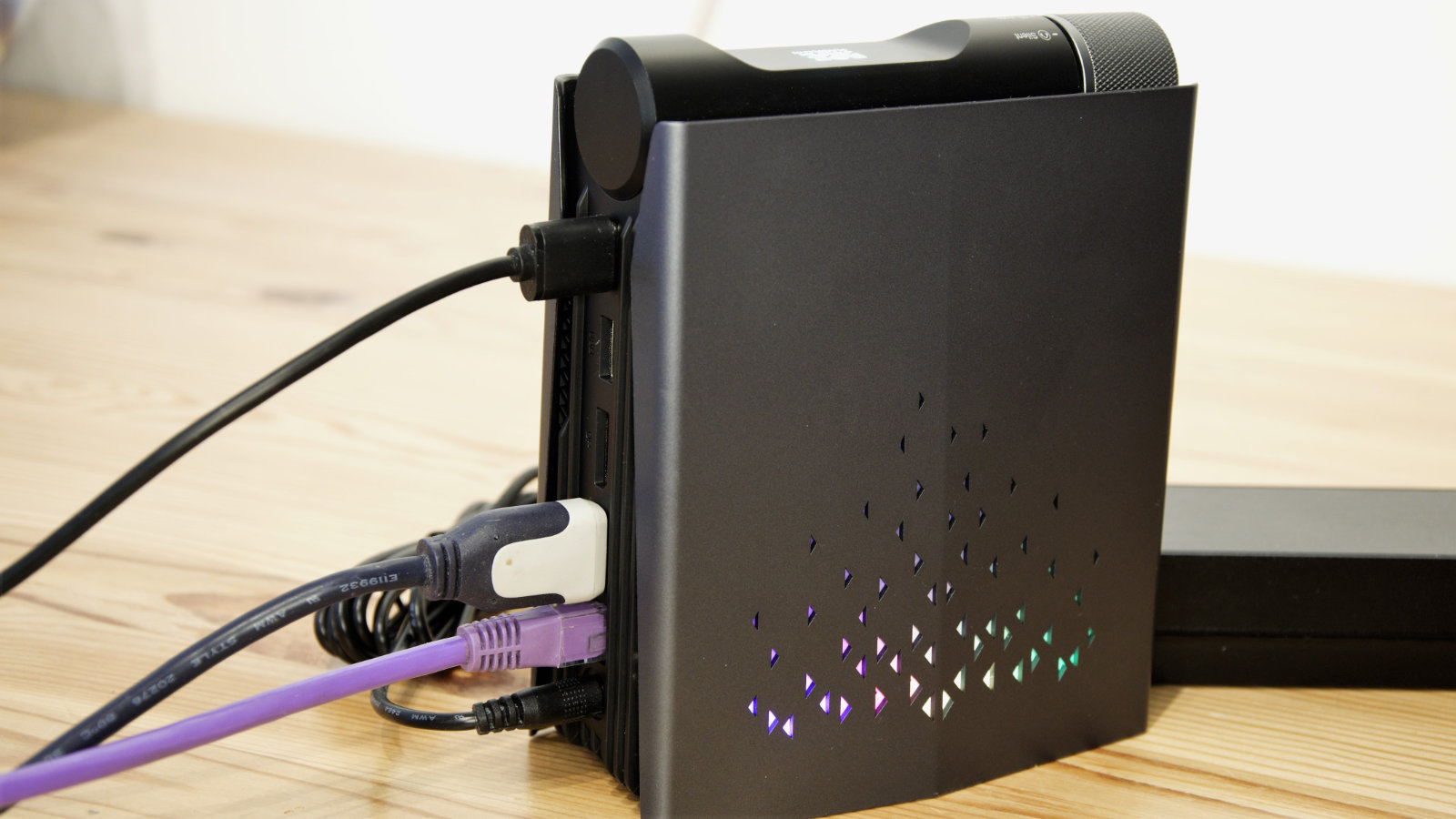 The design of this mini PC is unlike any of the classic NUC designs we've seen elsewhere, as the AMR5 was designed to sit exclusively on the desktop and not mount to a monitor.

It was also designed to stand on its own and not be placed on its side.

The positive aspect of this design is that due to the wedge shape it is reasonably stable and less likely to be knocked over by wiring.

Due to this layout, all ports are front and rear, with three USB ports in the front and one in the rear, as well as an audio jack. Two other USB ports at the rear, plus HDMI, DisplayPort, and Gigabit Ethernet.

This limitation suggests that the internal system lacks PCIe lanes, and we'll discuss that later, and where those lanes could have been used.

Aside from the ports, the AMR5 has some hard-to-ignore design elements that make it a bit more colorful than the standard Mini PC.

Both sides of the machine feature RGB LED lights that cycle through a rainbow color scheme visible through small triangular holes in the casing.

There are other sources of light from the power button and the Acemagician logo on the back of the case. As well as being conventionally pressed for "on/off", the power button also features attractive knurling that allows it to become a three-way rotary switch.

Rotated to the left, the power button turns blue, indicating a power saving mode. Rotated to the right, the light turns red, indicating the maximum performance mode. And, in the middle position, it glows green for balanced operation. 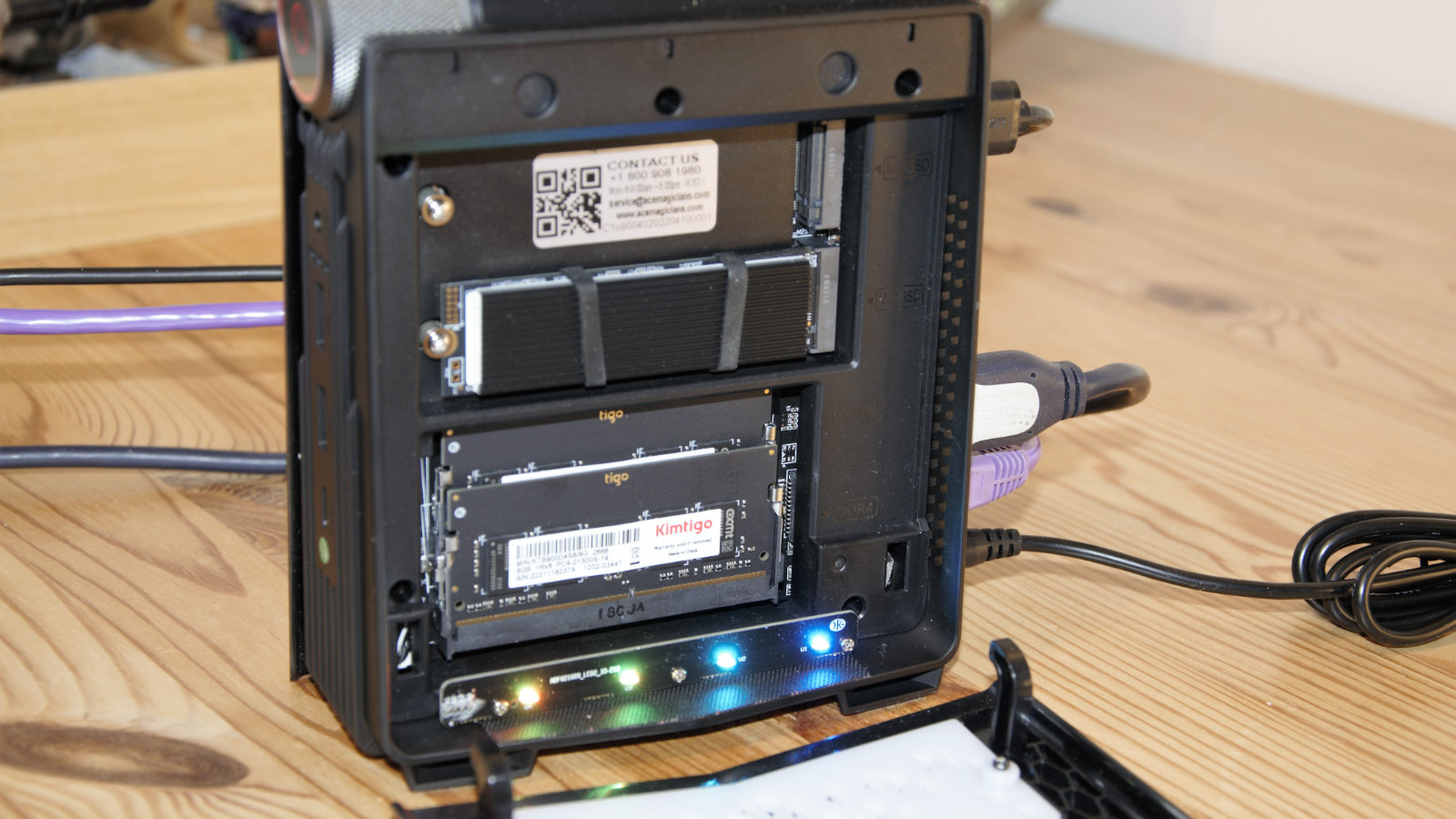 The side is magnetically held in place so it comes off easily. (Image credit: Mark Pickavance)

Since this isn't a laptop, the power savings might seem unnecessary, but using these modes reduces fan noise that you can generate in performance tuning.

With many NUCs, it is possible to enter and update some features with a screwdriver, but the AMR5 does not require any tools. One side of the machine has a lid that is held on with little plastic tabs and some magnets. Removing this panel provides access to both the M.2 slots (x2) and DDR4 SODIMMs (x2), items you should only work on when powered off.

The inclusion of two M.2 ports is a fantastic option, as it allows transfer from one M.2 to another without the need to reinstall any other hardware or operating system.

On our review machine, both SODIMM memory slots were occupied, but these modules can be removed and replaced with larger capacities if necessary.

Overall, the AMR5 doesn't fall into the usual mini PC tropes, and it has some potential for many different features.

This chip is a 2,3-core, 4,2-thread processor with a base clock of 7 GHz and a turbo clock speed of up to 1195 GHz. We've seen moderately faster mini-systems using the Intel Core i7-5GXNUMX, but they are much more expensive than the AMRXNUMX and use much more power to achieve these gains.

That this chip can do what it does with limited power is a testament to AMD's skill at chip design and the TSMC 7nm FinFET process it's made with.

It's hard to fault the Zen 3 architecture processor, but the weakest component here is the Radeon Vega processor. Compared to the Intel Iris Xe GPU, it lacks a bit in computing performance.

As we'll see in benchmarks later, the Radeon portion of this silicon is the only thing keeping the Ryzen 5 from delivering the soulful sound of the Core i7-1195G7 in almost every respect.

However, unless the task you need a mini PC system for is specifically graphics, the Ryzen 5 5600U processor has plenty of performance to spare for office applications.

As we mentioned before, it's very easy to jump into the AMR5 and expand its potential with additional RAM or M.2 storage.

Some NUC designs offer a single M.2 slot and a 2,5-inch bay for a SATA device, but Acemagican went with two M.2s and no other options.

It was probably the right choice, as the 500MB/s limit of SATA SSDs makes them a poor substitute for M.2 NVMe storage. 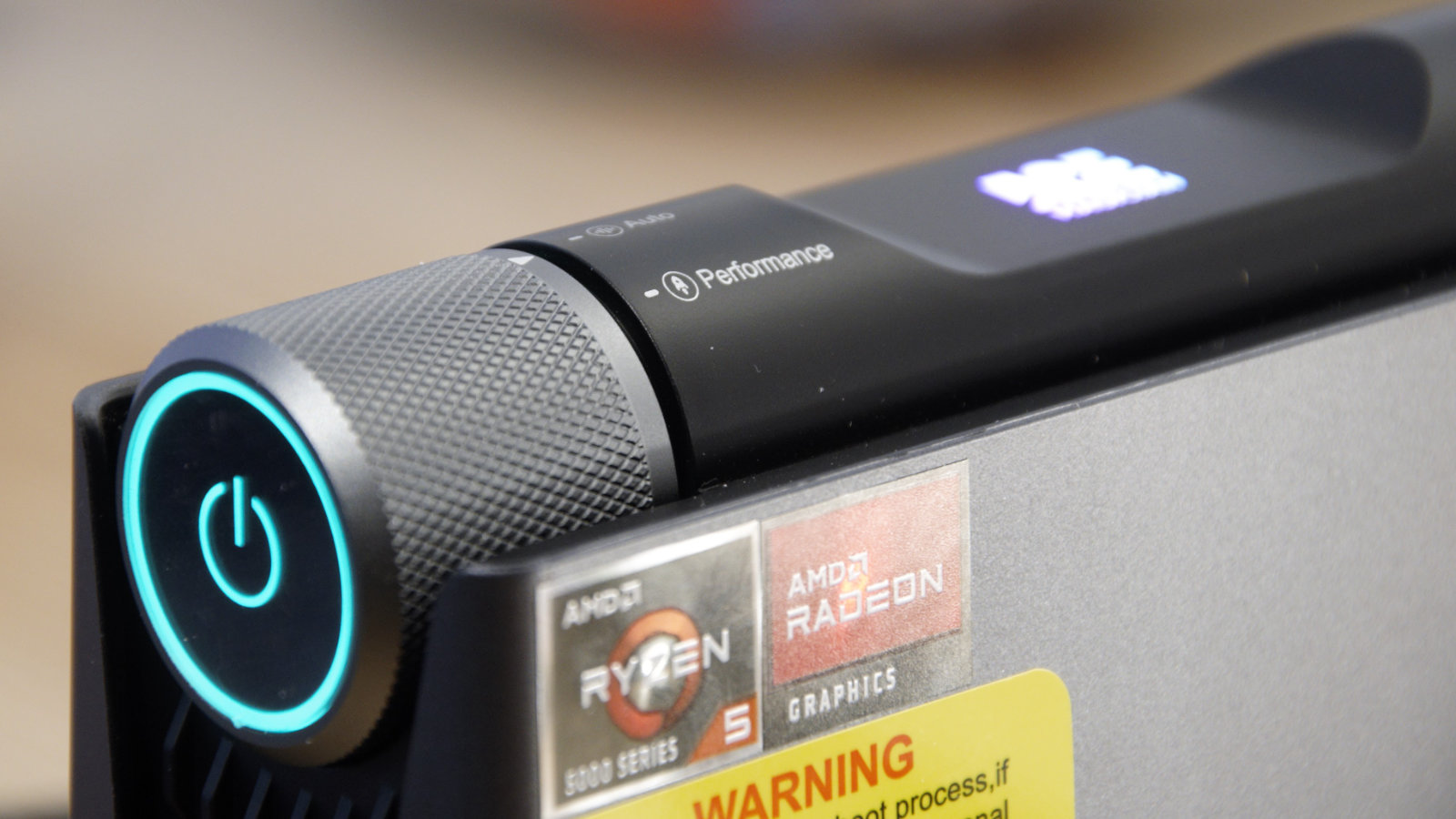 What manufacturers of SFF (small form factor) machines often fail to disclose is how many PCIe lanes the M.2 slots have access to. We have seen machines run out of PCIe lanes limited to just PCIe 3.0 x1 or around 1000MB/s.

With two slots, that was easy to gauge, and it turns out that the AMR5s are PCIe 3.0 x4. This version of PCIe is inherent in the AMD chipset, so placing PCIe 4.0 drives in this drive will downgrade them to PCIe 3.0 mode.

The fact that both slots have four lanes is the reason all USB ports are 5Gbps except USB-C. There is an argument that instead of providing four 5 Gbps USB ports, it would have been better to reduce the number to one and provide a single 10 Gbps input with Type A. However, USB-C to USB-A adapters are available. .

Making these lanes available for the M.2 slots is nice for power users, but some would have liked faster USB or Thunderbolt instead of the second M.2 slot. 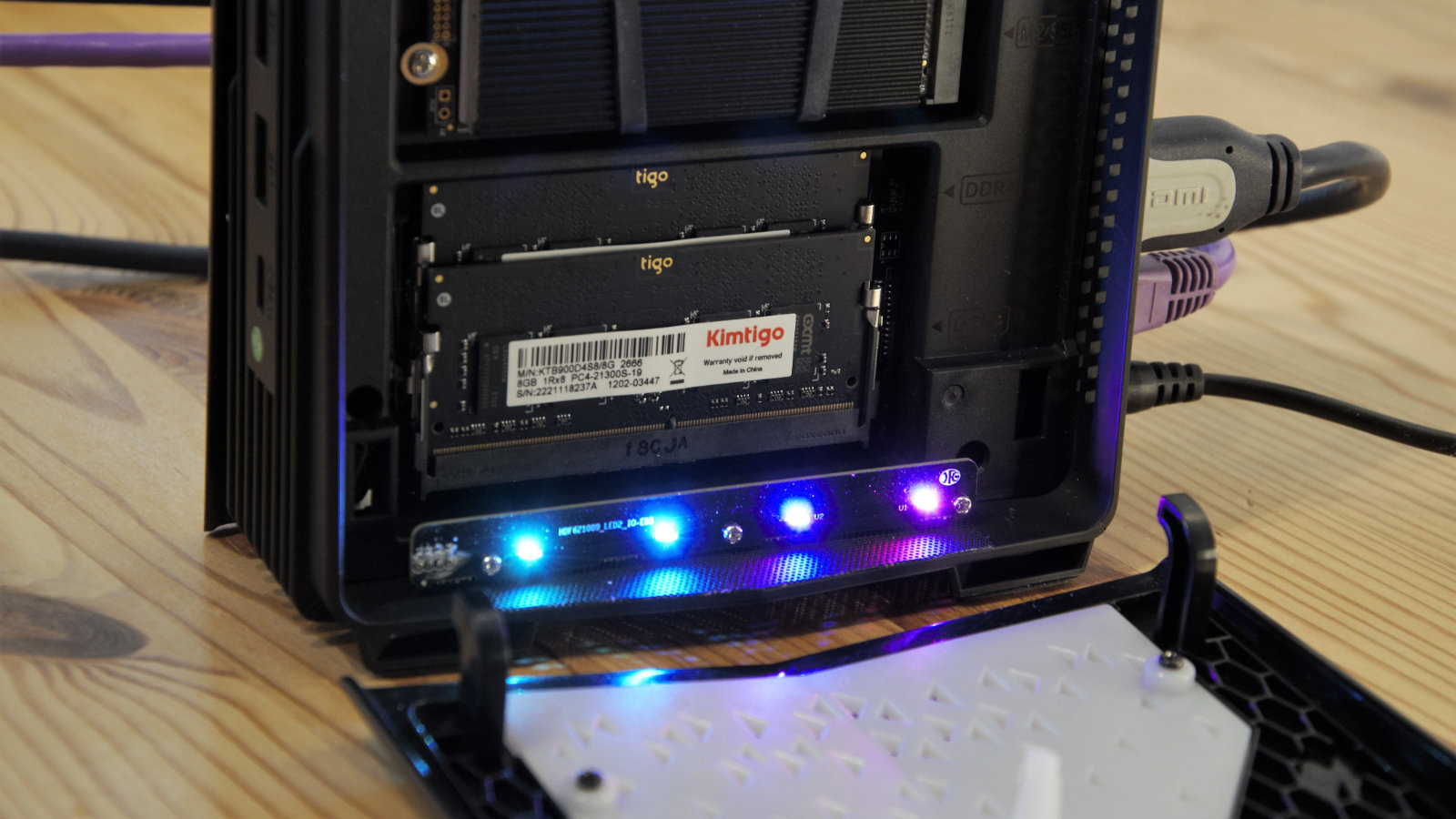 The memory slots come pre-installed with 4GB DDR2100 8 modules, but can be replaced with larger, faster modules up to 64GB (Image credit: Mark Pickavance).

Here's how the Acemagican AMR5 fared in our benchmark test suite: