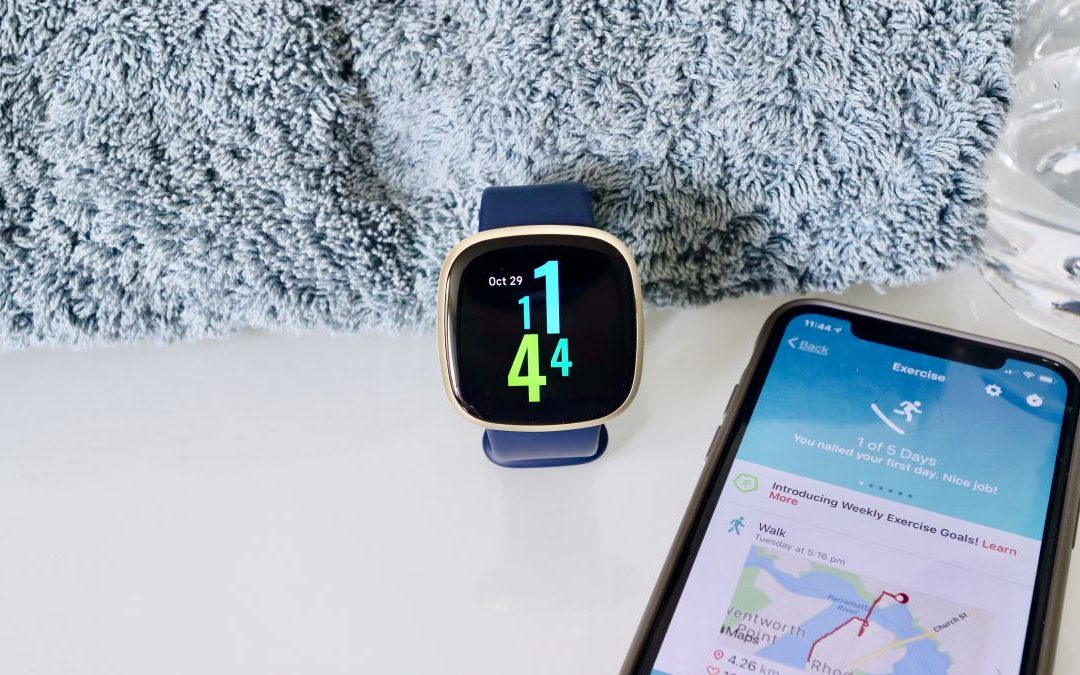 The Fitbit Versa 3 finally fixed our biggest gripe with the Versa line of smartwatches, and we can recommend it as a great buy. Based on price, we even ranked it above the Fitbit Sense on our list of the best Fitbits, earning us the top spot. Versa 3 now comes with built-in GPS to track, in real time, the pace and distance of your walks, runs, bike rides, or hikes if you decide to leave your phone behind.

While it's definitely a step up from the Versa 2, like the larger and truly beautiful screen, there are still little things about the Versa 3 that make it so frustratingly close to being one of the best portable devices on the market.

Don't get me wrong: The Versa 3 is a strong contender to be the best fitness tracker on the market, especially given its relatively affordable price point and the myriad of fitness tracking capabilities it has, which also includes an SpO2 sensor for measure oxygen in the blood. levels while you sleep. However, much more useful information is locked behind the Fitbit Premium paywall, and the side button redesign has made it frustrating to use.

Instead of a physical button, like on the Versa 2, there's now a recess on the left side of the chassis that's similar to the inductive button that debuted on the Fitbit Charge 3. Unfortunately, it's not as well implemented on the Versa 3, and it takes a few tries to find the exact place you need to tap to open apps and submenus.

Other than that though, the Versa 3 is an attractive wearable that does much of what the Fitbit Sense can, save for stress management and advanced heart monitoring. That means it's cheaper than the Sense, though it's a bit more expensive than the Versa 2 in some markets (it costs the same £199 in the UK as its predecessor). However, built-in GPS, a larger 1,58-inch AMOLED display (same as the Sense), and an SpO2 sensor more than justify the slightly higher €229/AU$399 launch price.

There are also a lot more fitness monitoring features on the Versa 3, making the device's interface much busier than was available on the Versa 2 at launch. There are ways to handle them all, but it takes some getting used to.

Despite this, performance is excellent, as you'd expect from Fitbit devices. Battery life is around six days on a dark screen, but cut in half if the screen is always on. GPS isn't as accurate as on other bands we've reviewed, but for the average user that won't matter much. The heart rate monitor is now slightly more accurate than the Versa 2, but without a chest strap to compare it to, it's hard to judge its accuracy exactly.

Alexa is, of course, on board to help answer a few questions displayed on the device, and with Google's purchase of Fitbit, a future firmware update will also add the Google Assistant to the wearable.

There's still a dearth of productivity apps for Fitbit's smartwatches but, as we said in our Versa 2 review, they're primarily fitness trackers that have some smartwatch benefits. 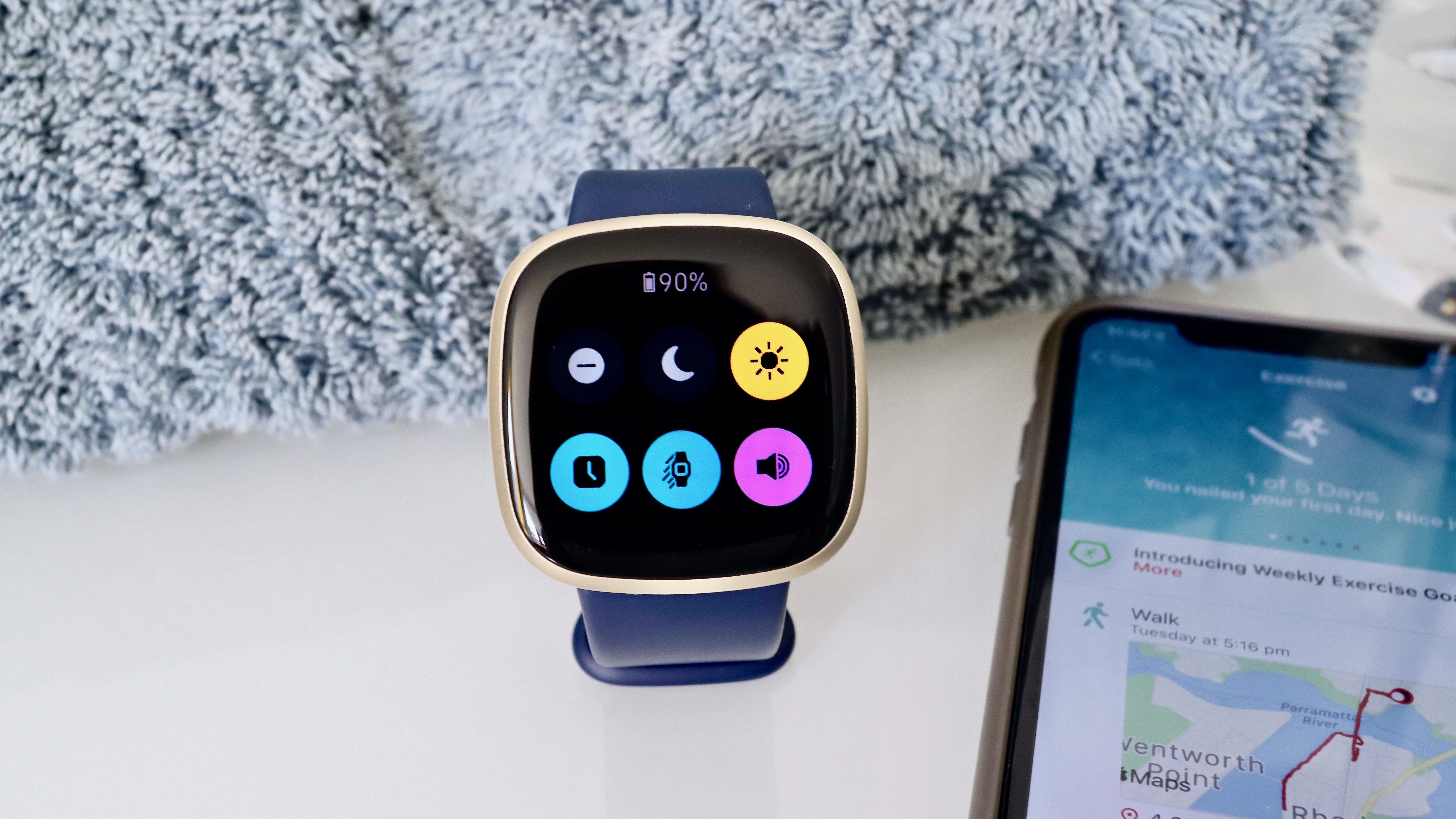 One of the best features of the Fitbit Versa 3 is its high-resolution AMOLED screen (Image credit: TechRadar)

Fitbit announced the Versa 3, along with the Sense and Fitbit Inspire 2, during a virtual conference in August 2020. It was reserved the next day and began shipping in late September. The Versa 3 is currently available for purchase direct from Fitbit and major retailers worldwide.

Interestingly, in the UK, the Versa 2 and Versa 3 are listed at the same price of €199. However, in the US and Australia, the Versa 3 is priced higher than its predecessor, selling for AU €229 and AU€399 respectively. That makes the Versa 3 the middle child - no longer the flagship, with the Fitbit Sense taking over that role and costing significantly more at $329 / £299 / AU$499.

Unlike the Versa 2, which had a more expensive special edition version, the Versa 3 is only available in the standard edition in three different colors: two soft gold cases with a midnight blue and rose gold strap, and a black chassis. with a black band. .

The Fitbit Versa 3 has essentially the same design as the Fitbit Sense, with a large square screen and rounded corners (Image credit: TechRadar)

At first glance, the Versa 3 looks identical to its predecessors, but a closer look reveals some design tweaks that make the new device look a bit more stylish. In fact, a color change to the aluminum chassis makes the Versa 3 look quite classy. The "soft gold" case is neutral, but a black option retains the Versa 3's universal charm.

The chassis color change isn't the biggest design change, though; this is the screen size. The display is now a 40mm larger AMOLED panel than the Versa 39's 2mm, with a higher resolution of 336 x 336 pixels (the Versa 2 is 300 x 300). It's a bright, crisp, very clear screen that looks absolutely stunning even on its "dark" setting from almost any viewing angle. The bezels, however, are still quite thick, similar to the Versa 2.

Navigating menus and apps via the screen is also a walk in the park: the screen didn't lag once during our test period, and swiping to see different features worked remarkably well.

Another design change is the side button, or rather the lack of it, and that's perhaps our biggest complaint about the Versa 3. Instead of a physical button, there's a capacitive gap on the left side of the watch that, when press correctly, it sends a short vibration to indicate that you have activated the smartwatch. It's located under the edge of the chassis, so you have to feel it, and finding the exact place to press isn't particularly easy. We've been using the Versa 3 for over a month now and still need a few tries to find the exact spot. Fortunately, you don't always have to use that "inductive" button to interact with the watch: you can set the watch to wake up by touching the screen, then swiping to bring up the menu you need. That said, there are "shortcuts" (like showing Alexa) that can be set on the watch, and these require a tap-and-hold or double-tap action to activate. And it can be frustrating to evoke them due to the inconsistency of this button. 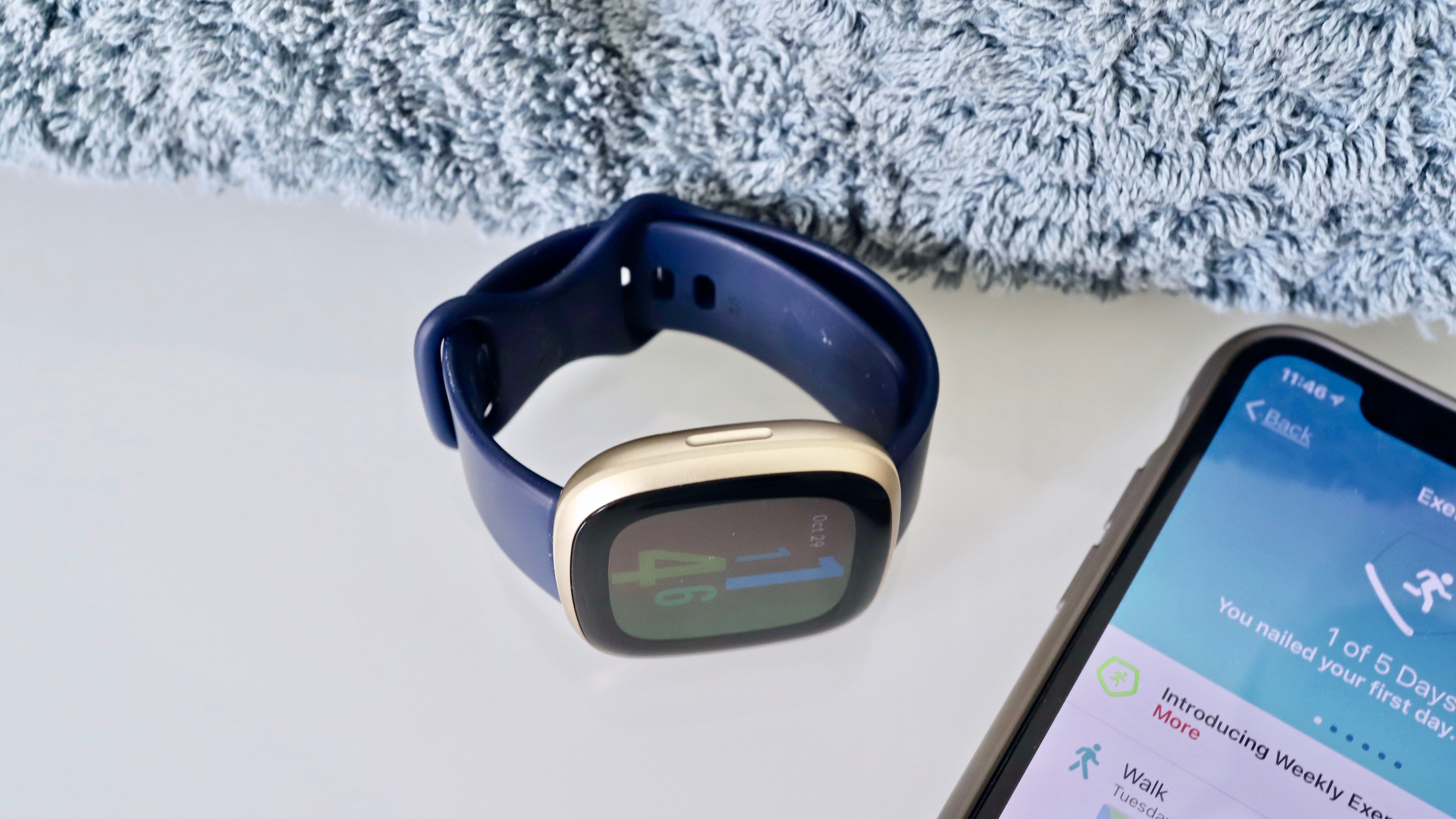 The Fitbit Versa 3 has a redesigned side button that's easier to use (Image credit: TechRadar)

On the right edge of the watch's chassis is a small microphone and speaker that should theoretically allow you to receive calls.

Fitbit has also changed the strap mechanism, just like on the Fitbit Sense, and we think it's better than the mechanism on the Versa 2. A small button acts as a latch that, when pulled slightly down, releases the clasp. It gives the watch a much more streamlined look and makes it very easy to replace the supplied default sport strap.

This silicone band is also different from the one that comes with the standard edition of the Versa 2. Fitbit calls this new model the "Infinity Band" because it doesn't have a buckle - it's the same one that also comes with the sentido.

Another big difference between the Versa 2 and the new iteration is the charger. Instead of the old boxy USB charger, there's a small magnetic docking station that recharges the juice extremely quickly: we went from 64 percent battery to 100 percent in less than 15 minutes.

The Versa 3, like its predecessor, is also waterproof to 50m/164ft, which means you can wear it in the shower or swim with it on your wrist. It can even survive a bath in salt water, though Fitbit recommends that you don't wear it in a hot tub or sauna. The large screen makes it easy to scroll through menus (Image credit: TechRadar)

As a smartwatch, the Versa 3 works exactly like its predecessor. It's still a clean and simple experience compared to something like an Apple Watch, but there should still be enough apps to satisfy many users. For example, there is a Philips Hue app available to control smart lights and there is also a maps app. That being said, some apps are geo-specific to the US, UK, or other regions, so the range of apps available will vary depending on your location. However, Fitbit Pay should be a convenient option for most countries, as many banks around the world now support the cashless payment method.

It's worth remembering that many of Fitbit's best apps are paid, just like on Apple Watch or Android Wear OS devices, so you'll need to find out if you want some of the extensive features they offer.

Fitbit offers a decent range of watch faces, so it should be easy to find something you like... although, surprisingly, switching to a new watch face takes a while to take effect. Amazon's Alexa is also on board to answer quick questions, and if you set up the Alexa app on your phone and sync your Amazon account, you can do so much more, like set reminders and control your smart home devices. With Google set to buy the Fitbit, Google Assistant support will also be added, but there's no clear timeline yet as to when that should happen.

As before, Deezer and Spotify music streaming support is available, but if you leave your phone behind during a workout, the only way to access your tunes offline is through Deezer. There is no Spotify offline feature yet, which is certainly enough…