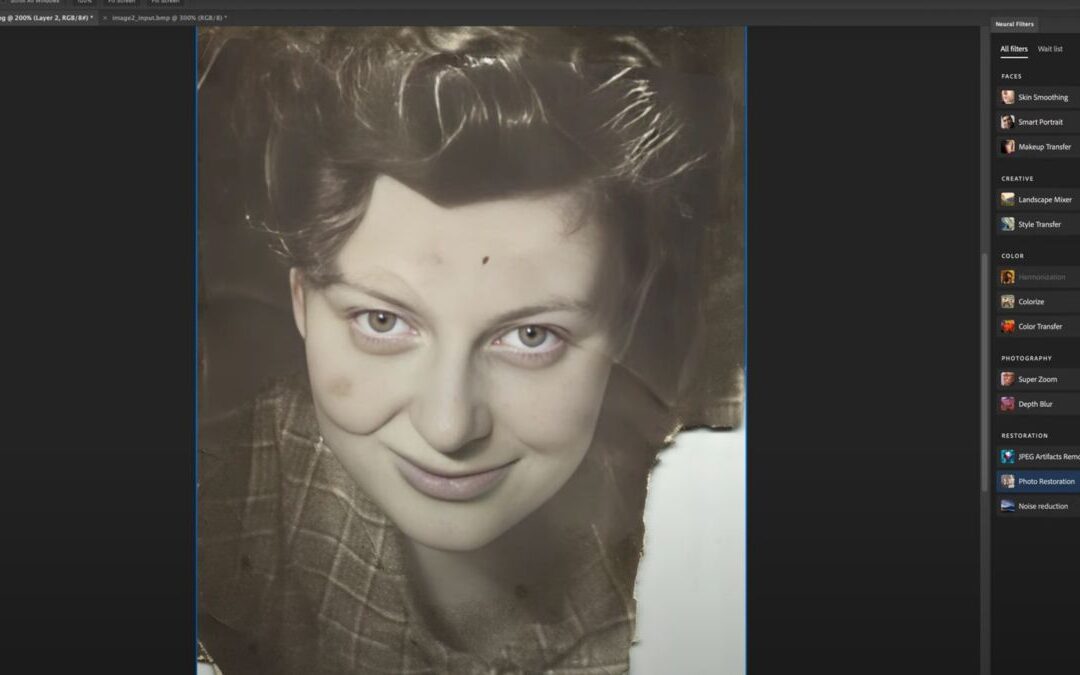 Restoring old family photos can be a nice waste of time, but an amazing new Photoshop tool has just arrived to speed up the task for those who prefer to do it with a single click.

Photoshop's new Neural Photo Restore filter effectively automates many of the program's tools, like content-aware fill, to help you restore your old photos in seconds.

"Neural Filters" is the collective name for Adobe's AI-powered editing tools, which also include effects like Depth Blur (to create artificially shallow depth-of-field effects) and Colorize, which colors black and white images.

But the new photo restoration tool seems especially useful if you recently scanned a bunch of dog-eared portrait photos. As you can see in the demo below, it can detect and repair scratches, while working its magic on image contrast, noise, and color.

All of these things are already possible in Photoshop, but the breakthrough is the program's ability to detect problems in a photo and automatically correct them. This opens up photo restoration to those unfamiliar with Photoshop's often mysterious menus.

Since most of Photoshop's neural filters run locally on your computer, you'll need a relatively new machine to use Photo Restoration and these other tricks. Adobe says you need a Mac with macOS 10.15 Catalina (or later) or a Windows computer running Windows 10 (or later).

Adobe didn't say exactly when the photo restoration filter will be available for download, but we're asking for a quote and will update this story when we get back to you. When Photoshop updates are available, the program usually prompts you to update your filters, so keep an eye out for a push soon.

Photoshop Neural Filters only arrived in 2020, but these AI-powered tools have already grown dramatically in number and versatility. However, the new photo restoration tool could be one of the most useful yet.

It is not the first program to meet the growing demand for digitizing old snapshots. Google's PhotoScan app allows Android and iOS smartphone users to import prints into their digital library and apply automatic corrections such as glare removal. There are also other cloud-based services, such as VanceAI.

But the power of the Photoshop brand and its ubiquity means its photo restoration tool has a good chance of being used more widely, especially among beginners who aren't familiar with all of its tools and are looking for a one-click solution. The only drawback is that you need the full version of Photoshop to use the feature.

If you don't want the program to be too heavy on your photo, there are adjustment sliders and checkboxes (for things like "enhance face" and "reduce scratches" so you can customize the look).

That's good news because while the "Photo Restoration" Photoshop demos are impressive, some may find the end result too risqué and contrived. Still, there's no doubt that the functionality will improve over time, and this is just the beginning of a new Photoshop "robot" for those who don't know their curves from their Smart Objects.