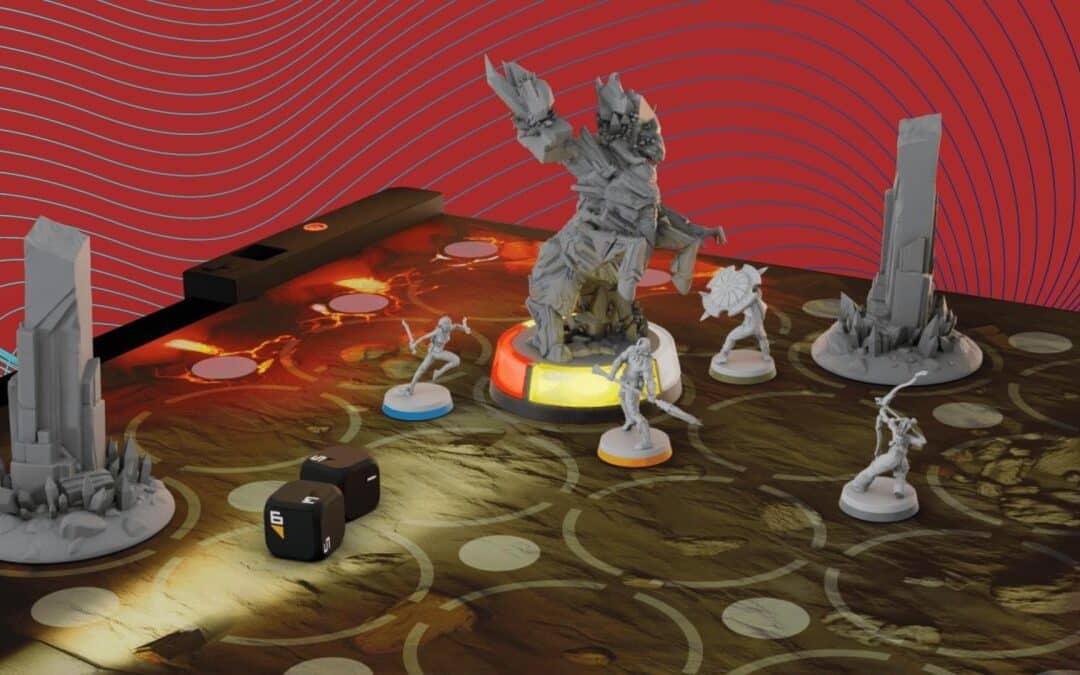 Board games are enjoying their time in the spotlight right now, but I'm not just talking about things like Monopoly or Cluedo. There has been a boom in titles that vary in gameplay style, complexity, and design, appealing to a wide range of demographics.

Given that tabletop gaming is still mostly completely physical (with a few popular titles getting digital tabletop game adaptations and ports in Tabletop Simulator), it's pretty hard to imagine what the future of society's gaming will look like without imagining the star wars hologame table But finally a bridge may have appeared that connects us to this fantastic holographic configuration.

Teburu is a platform created by Xplored that can be described as a console for your games. It allows tabletop games to take advantage of digital assets and features, while retaining the physical and social aspects that make them great. The deck itself simply unfolds and needs to be placed under the physical game pieces (as long as you're playing a Teburu compatible title).

Part of its appeal is its simplicity. The system uses a combination of sensors built into the board, a series of electronic identification tags that need to be placed on figures and tokens, and the official Teburu companion app.

The board can also track individual tiles and even comes with physical dice that feature sophisticated technology that allows the app to read and record your scores. Most of the marketing materials I've seen focus on Teburu's own game, The Bad Karmas and the Curse of the Zodiac, but other Teburu-compatible games are also being developed along with Vampire: The Masquerade and Sword & Witchery.

This ties in with Teburu's other big draw for nerds like me: it's still a physical system. I'm a huge fan of tabletop games and tabletop RPGs, and while I love playing titles like Terraforming Mars or Scythe on Steam, the video game versions can't replace the feeling of sitting with friends, in person, around a table, with snacks.

It was something we missed so much during the Covid-19 pandemic lockdowns. Playing online certainly took the itch out of me, but it can't replace the real deal for me.

The board game community contains many collectors who enjoy physical hardware, including myself, and I'm not ready for tablets and computers to make my growing pile of rulebooks and RPG games irrelevant. for the moment.

The Bad Karmas does a great job of showing off Teburu's abilities. This is a boss fighting game in which players will move character miniatures around a board while fighting huge monsters inspired by the twelve signs of the zodiac.

Although you still have to physically move your models on the board, you can view important information on your smartphone, which acts almost like a controller. A separate tablet, such as an iPad, will display all of the essential game information, including player turn order, enemy health, and an overview of what's going on in the game.

While you will have to move the enemy figures around the board, Teburu will control their actions and movements. It's like fighting an enemy from an AI video game instead of one that usually dictates random dice rolls. Teburu's base also has other features, with different illuminated sections indicating the direction of incoming enemy attacks. Thanks to these sensors at the base of your player models, the enemy AI knows exactly where you are on the board.

At the end of each match, you're even given a video game-like marker to navigate. The companion app awards titles for player achievements, such as match MVP or highest damage. It really does feel like a hybrid system rather than a true analog or digital board game, so even though it's not a hologram, the goblin part of my brain that loves flashing lights and graphics is definitely relieved.

The next step in physical table games?

However, I'm not only excited for The Bad Karmas, as fun as that title sounds, but for what Teburu might offer more mainstream titles in the future if it turns out to be a hit. Yes, there are official collaborations going on, but if Teburu can be expanded for use in other established games, then I'm completely sold on the idea.

It will take a lot of development within the companion app, but having the ability to enjoy your favorite games without annoying or frustrating admins seems like a godsend. One of the biggest problems we have when buying a new game is learning the ropes and trying to remember a complex new set of rules. Slow learners like me have to treat the initial setup and play like a pancake: the first one never works out.

Teburu can correct players if they try to perform an action or move that goes against the rules. While physics rulebooks compile all the information you need to play a game, stopping to brood can be a hassle, and often "illegal" moves won't be detected until many moves after that have already happened.

Naturally, it won't be something every board game fan will enjoy, so it's aimed at a slightly niche demographic, but it certainly seems to fall somewhere between traditional board game systems and something entirely online or even VR-based.

This isn't the first time we've seen board games dive into the digital world, as One Night Ultimate Werewolf and Gloomhaven both have an official app that can be used alongside the game. launch thanks to the integration of a mobile app to manage enemy movement, story content, and general digital game management.

Supporting a crowdfunding project carries risk, so we can't recommend that you commit, but if it's something you want to support, there's still time on the Teburu Kickstarter. The €170 (about £185 / £140 / AU$250) price tag is high, but far from extravagant in the world of tabletop gaming, where Warhammer miniatures can cost a small fortune and many of the better games cost as much as a triple-A video game at full price.

I really hope that Teburu delivers on its promise, and thankfully, Xplored founder Davide Garofalo has confirmed that Teburu will be an "open platform," hoping to provide development kits to companies of all sizes who want to bring their games to market. the platform. This will allow players to use existing board games in their collection (including figures and tokens from those games) with Teburu in the future.