While it may be better than its sibling, the Nutribullet Juicer Pro doesn't actually cost much more, so we'll still classify it as a budget juicer. But with this model, you get two different-sized freezer trays, as well as two glass to-go bottles. Please note if you buy this model in the UK you will only get one of each.

Other improvements include a double size food pusher, as well as a third speed of juicing thanks to more power. It also has a larger pulp container than the Nutribullet Juicer, so it won't need to be emptied as often. Otherwise, both models are quite similar, coming with the same lidded juicer and identical setup.

Like the Nutribullet Juicer, the Pro model produces quite a pulpy and frothy juice, and it also extracts similar juice yields. It was unsuccessful on kale juice, but for other fruits and vegetables it was very fast. It's easy to use and a great entry-level juicer for those who may be new to juicing and don't want to spend too much money. But if you're looking for premium smooth juices and a device that can juice leafy greens, this won't be the model for you.

The Nutribullet Juicer Pro is available direct from Nutribullet in most countries. This is Nutribullet's premium centrifugal juicer, but only slightly more expensive than the standard Nutribullet juicer. The Pro includes upgraded features and more accessories, but it'll only cost you an extra $50 / £30 / AU$70. Based on that, we think it represents excellent value for money.

The Nutribullet Juicer Pro doesn't take up too much counter space because it's narrower at the bottom, but it widens out at the top and is also tall. The measurements are 16 x 10,3 x 9,3 inches/ 41 x 26 x 24 cm (height x width x depth).

The 27-oz./800 mL juice pitcher sits under the spout while juicing, and the sealable lid can stay on the pitcher during use to prevent spillage. The pitcher is handy for storing excess juice in the fridge, but it's also cleverly designed with a foam separator to keep the worst foam out of the glass.

With this model, there is no external pulp container to take up counter space, as the pulp stays inside the juicer. But that means it has to be taken apart to remove the pulp when it's full, which can get annoying if you're juicing large amounts of fruits and vegetables. However, the Juicer Pro has a 0.44 oz / 2 liter capacity, which Nutribullet says provides enough space to juice up to 17 apples before needing to be emptied.

Assembly and disassembly are simple; There are only three parts that stack up in the engine. Once stacked, they lock into place with the large stainless steel locking handle, and the machine won't start until it's in place.

The 3 in / 7,6 cm feed chute is wide enough for whole apples or, if you are juicing smaller foods, a second food pusher can be pulled out from the center of the large food pusher. This opens up a smaller ramp, making it easier to feed items like leaves and berries.

The juice spout has a convenient drip cap and is set high enough that a standard glass can be placed under it, should you want juice directly into your glass. On the front of the juicer is an on/off button surrounded by three buttons for the three speed levels. In the manual, you will find a table that lists the best speed setting for a variety of fruits and vegetables.

Coming with two 12oz/350ml glass bottles, you can take the juice you make in the Nutribullet Juicer Pro with you wherever you go. In addition, there are two silicone freezer trays. Please note if you are in the UK you will only get one bottle and one freezer tray at checkout.

All components of the Juicer Pro, with the exception of the pusher, are dishwasher safe so cleanup is a breeze. However, a brush is also provided if you choose to hand wash.

Performance of the Nutribullet Juicer Pro

To create a green juice smoothie, we combine celery with ginger, parsley, apple, and pear. The wide feed chute meant we could leave everything whole, so there really wasn't anything to prepare. We followed the manual's advice for speed, starting on low speed for the parsley, going to high speed for the pear, then turbo for everything else. 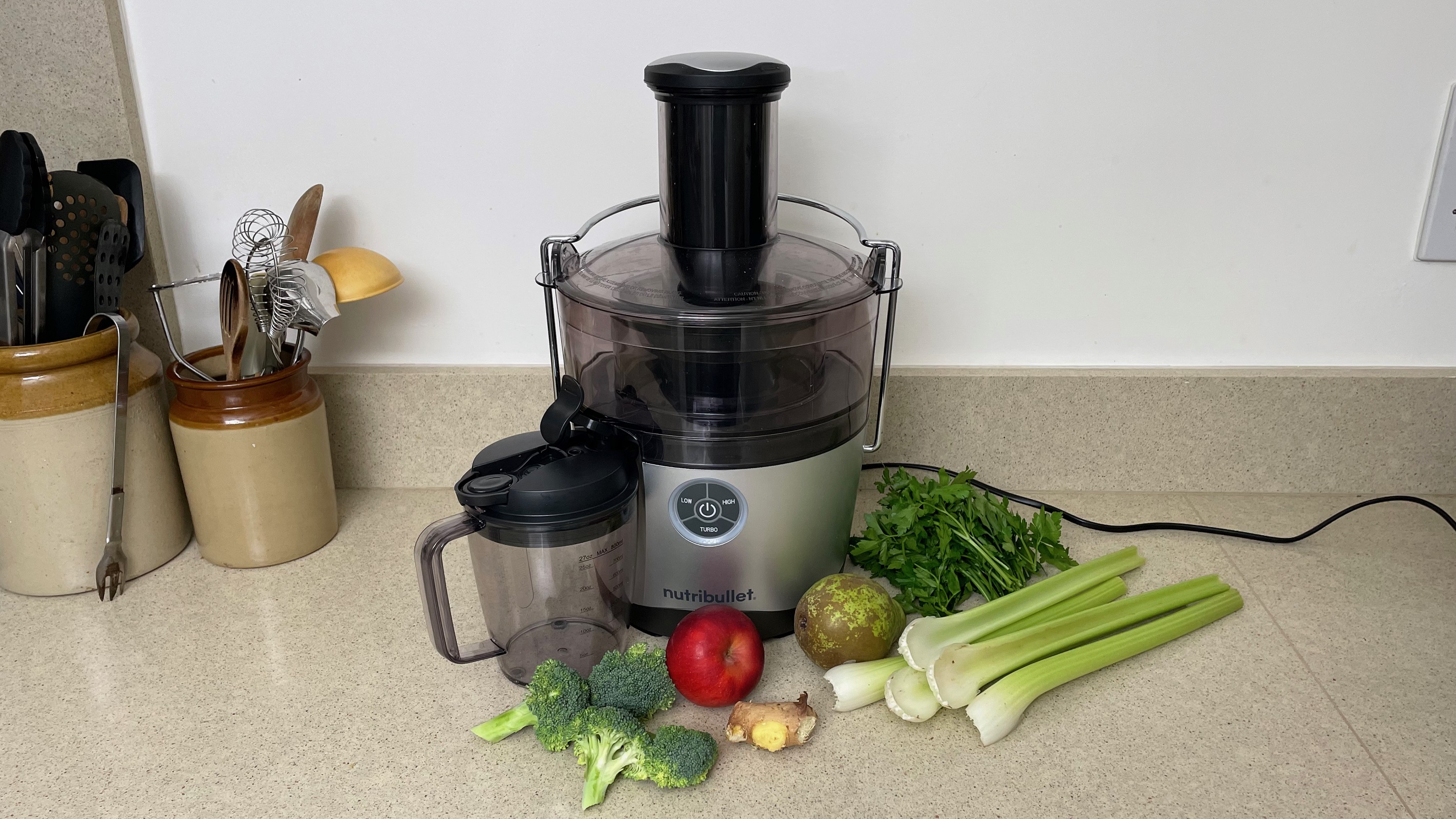 It took about 1 minute and 15 seconds to squeeze everything out; the Nutribullet Juicer Pro was quite loud, reaching 85dB on our sound meter. We weighed the ingredients before and after juicing to determine the juice yield, which was 71%. That's a respectable yield, though it's partly due to the pulp in the juice, which means a lot of fiber goes through the strainer. Some whole parsley leaves had also found their way into the drink. Along with a layer of foam on top, the juice was very aerated, which, combined with the pulp, gave it a more milkshake-like texture than a traditional juice.

Next, we peel five oranges and sauté them whole in turbo mode. The Juicer Pro made quick work of the oranges, going through them in less than 20 seconds. Unfortunately, the noise levels stayed the same as when we were making the green juice. Also, the yield this time around was 62%, which isn't as high as what we've seen with other juicers we've reviewed.

There was a thick layer of foam on top of the juice, which was retained in the carafe by the foam separator. But the juice in our glass was still very aerated. Unlike green juice, orange juice contains very little pulp, although we'd be lying if we said it's completely smooth. It was a tasty drink, though. 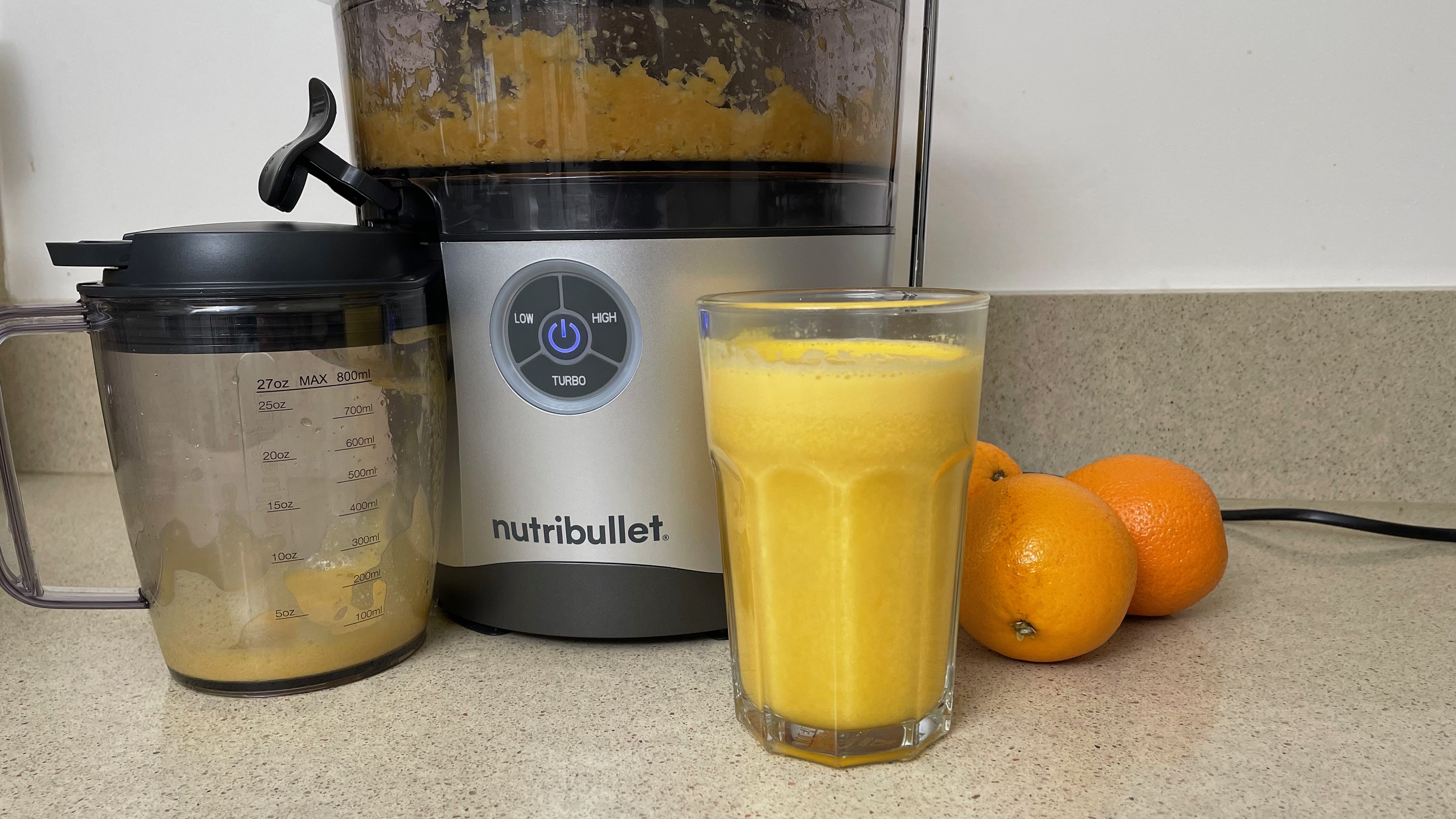 This Nutribullet juice extractor extracts the juice from a whole apple in just 5 seconds. And when you consider that you don't need to do any preparation first, it's very fast.

We wanted to juice the kale directly into the glass bottle that comes with the juicer; but surprisingly, it doesn't lie flat on the counter when it's under the spout, so we scrapped that idea and put a standard glass in its place. We juiced the kale at high speed, feeding it through the narrow chute, which took about 1 minute 30 seconds.

We can say unequivocally that if you're looking for a juicer to make kale shots, you shouldn't buy the Nutribullet Juicer Pro. there was less than one bite in the glass and the yield was a pathetic 6%. It's safe to say, then, that it was a waste of time and kale. 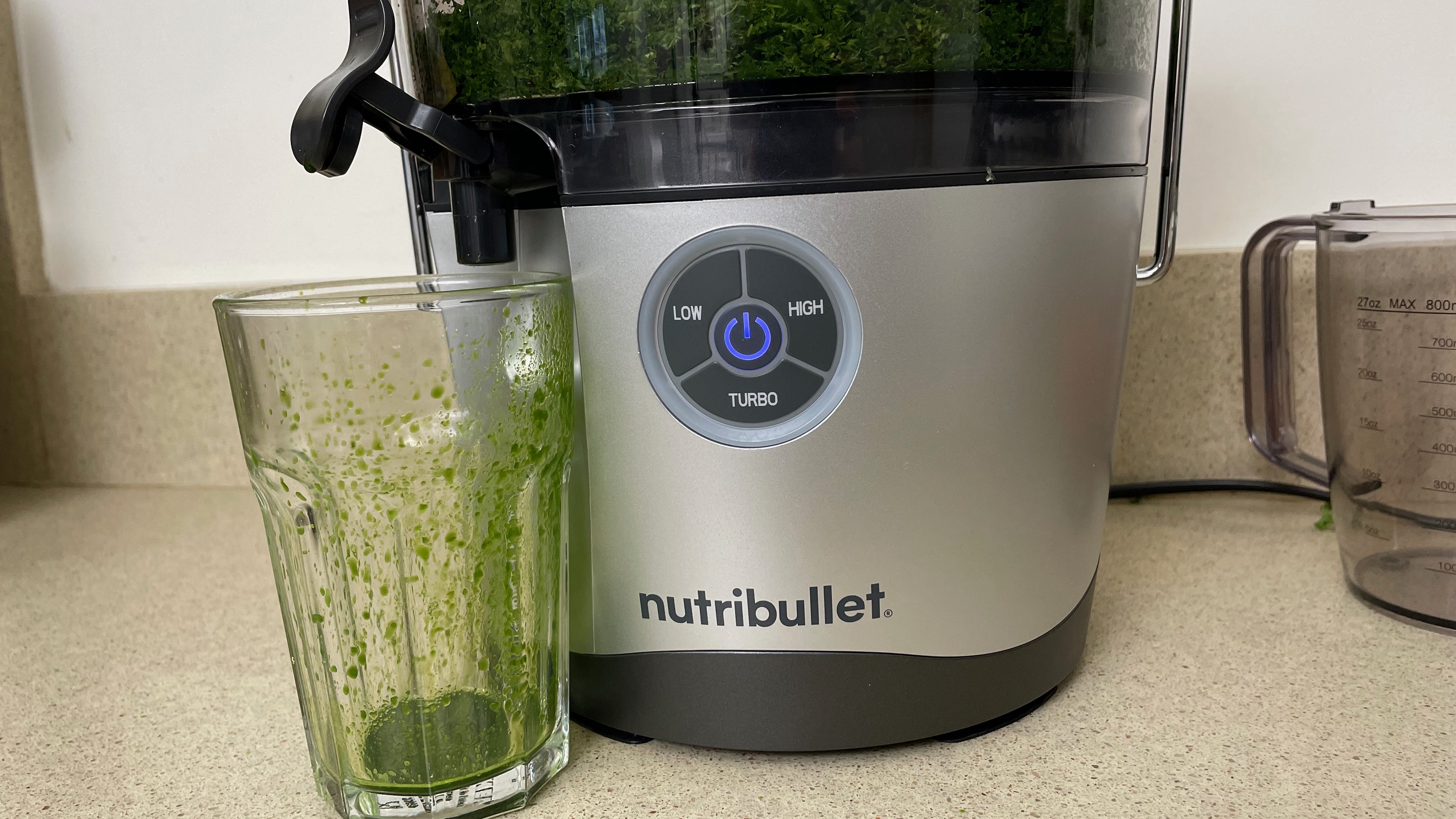 Finally, we were hoping to have more luck making carrot juice. The Juicer Pro juiced two large carrots in just 15 seconds, producing bright orange carrot juice with a decent 52% yield. The juice was not smooth though, it had a pulpy, powdery texture. 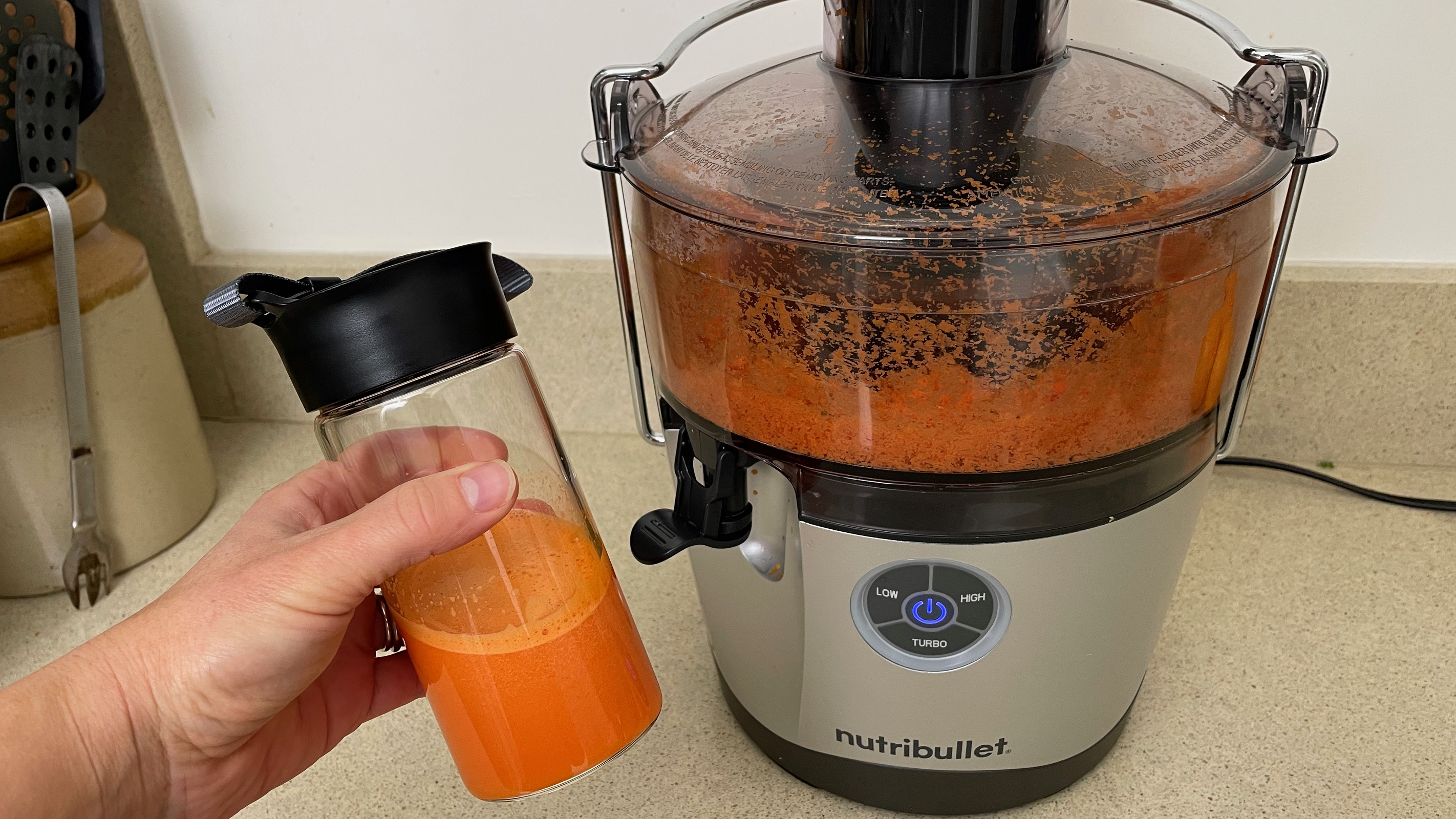 As mentioned, most parts of the machine can be placed in the dishwasher for cleaning. However, we noticed that our dishwasher did not remove all of the dough fibers from the sieve. Our advice would be to scrub the sieve with the brush. Keep in mind that the various parts of the Juicer Pro take up quite a bit of space in the dishwasher, so we found that a hot water rinse is often a faster way to clean larger components.

Swipe to scroll horizontallyAttributesNotesRatingPrice and AvailabilityWidely available and very reasonably priced, especially considering all the added accessories.Design Rating 5/5It's intuitive to assemble, dishwasher safe, and includes thoughtful features. as a froth separator and anti-drip system. 4.5/5 Performance Score It's fast, easy to use, and produces great-tasting juices, as long as you don't mind the pulp and froth. 4/5