Instant photography can be both exciting and frustrating, especially for those who are new to the medium. Although there is no shortage of cameras, those designed for beginners often have children in mind. Fortunately, la Instax Mini 40 is one more alternative for adults. 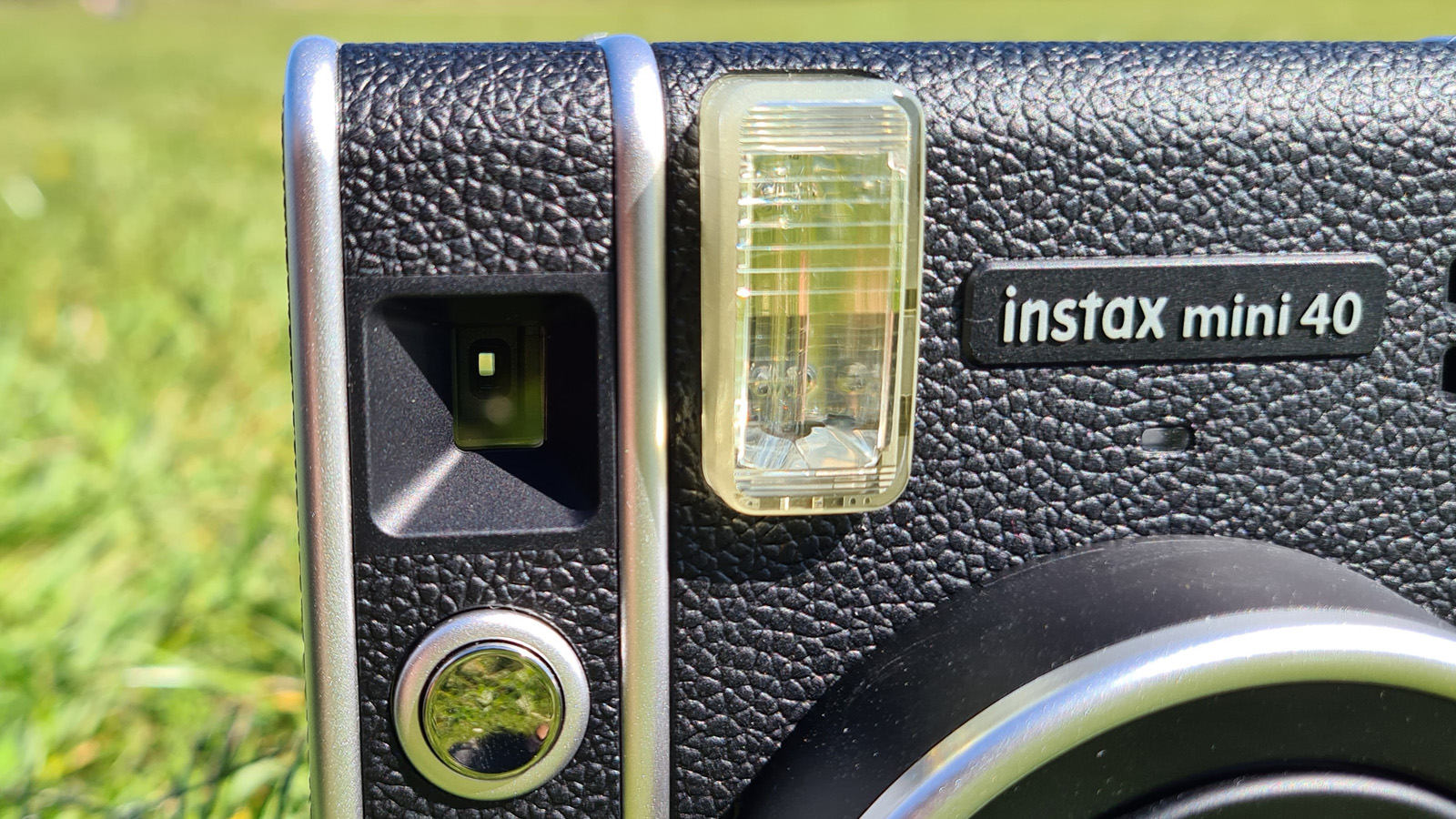 Automatic exposure and variable speed shutter return to take much of the guesswork out of using instant film, while an adjustable lens barrel adds the added versatility of shooting close-ups, without the need for accessories that are easily lost. .

Like the Mini 11, the Mini 40 carries Fuji's Instax Mini compact film. It's one of the most affordable sizes available, around $8/€8 per pack of ten shots, with a choice of color and monochrome prints and a wide range of colors and border patterns. Multipacks of different sizes can also further reduce the price. Each 54 x 86mm shot has a rectangular image area of ​​46 x 62mm (2,4 x 1,8 inches).

Redesign could broaden the appeal of the Mini 40, but priced higher than the more affordable Mini 11 for those looking to get into instant photography, they'll have to decide if these styles are worth paying more for.

May be mechanically identical to the Mini 11, but the faux-leather trim and silver accents of the Mini 40 make it look more mature.

The design is clearly influenced by the more expensive Fujifilm Instax Mini 90, but while this model is considerably cheaper and made almost entirely of plastic, it manages to avoid feeling cheap. It's a bit smaller than the Mini 11, but still not small enough to fit in a pocket; will have to search hybrid instant cameras like the Canon ZoeMini or the Fuji Mini LiPlay if portability is key.

held vertically, the Mini 40 is light enough to be used comfortably with one hand, the rubber thumb rest provides a lot of comfort. There are only two buttons, both on the front panel: one extends the lens barrel, the other releases the shutter. The built-in flash is automatic and cannot be turned off, even in direct sunlight, so all you have to do is point and shoot. You won't even find a tripod thread on the bottom of the body. The viewer is located to the right of the folding rear door, where you insert the film packs. As with the Mini 11, it is slightly off-center from the lens, so what you see through is not completely representative of the final impression.

A small window on the rear door shows how many clips are left in the currently loaded pack, which should prevent wasted clips from opening the film door early.

The spring-loaded lens barrel opens after pressing the release button. If you physically throw it away, it will switch to selfie mode, which is designed to shoot between 0,3 and 0,5 m; use it for something closer and the results will be very blurry, so don't think you can treat it like a macro lens.

This means you don't have to carry attachments with you, as was the case with older Instax cameras. The small mirror on the lens barrel helps align your photos, although the convex shape distorts your reflection a bit.

As with most instant cameras, the viewfinder is separate from the actual system optics. Here it is off center and gives a generous rendering of what will fit in the frame. You can often get a little closer to your topic than you expect, which can be something of a learning curve. 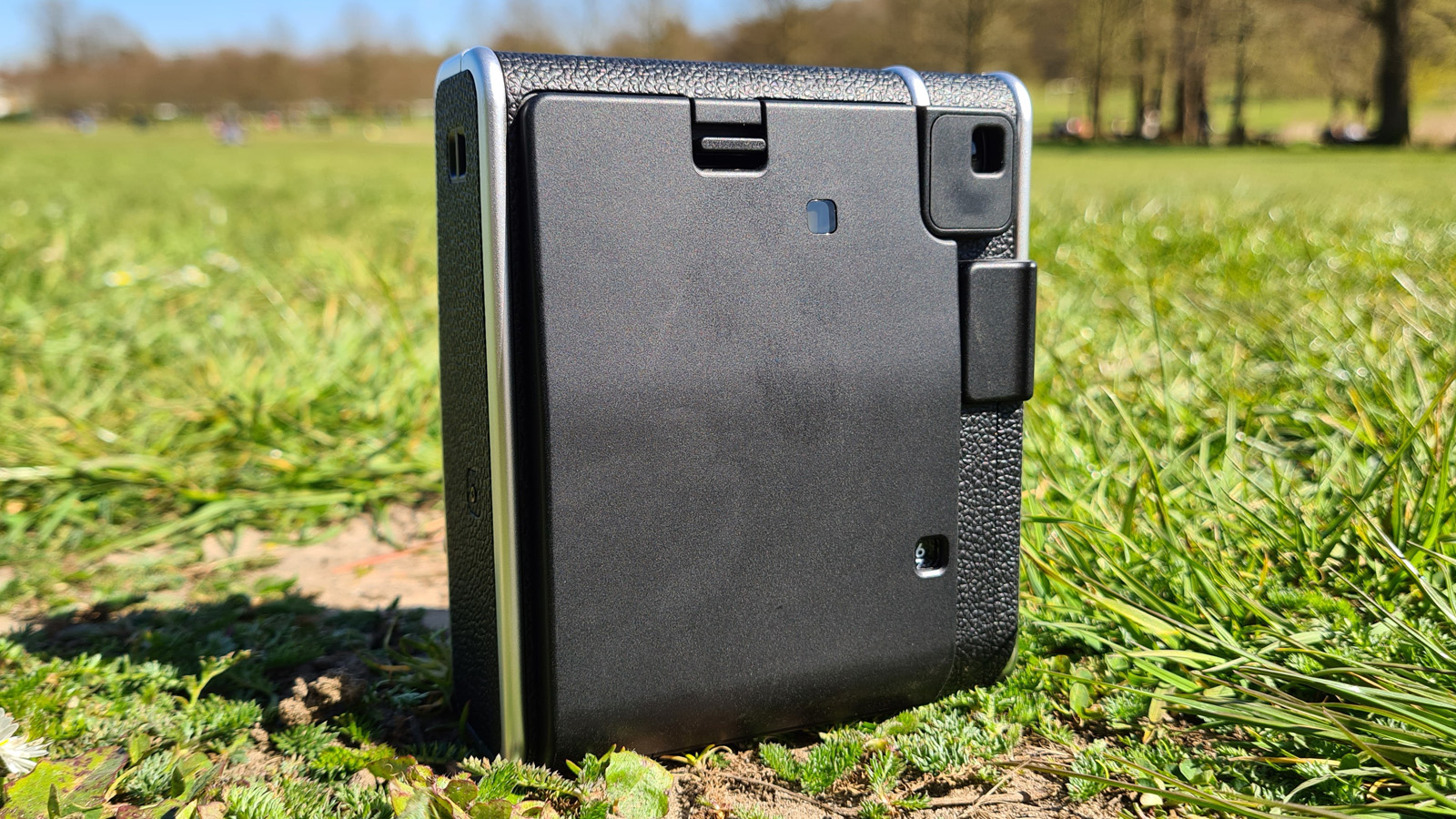 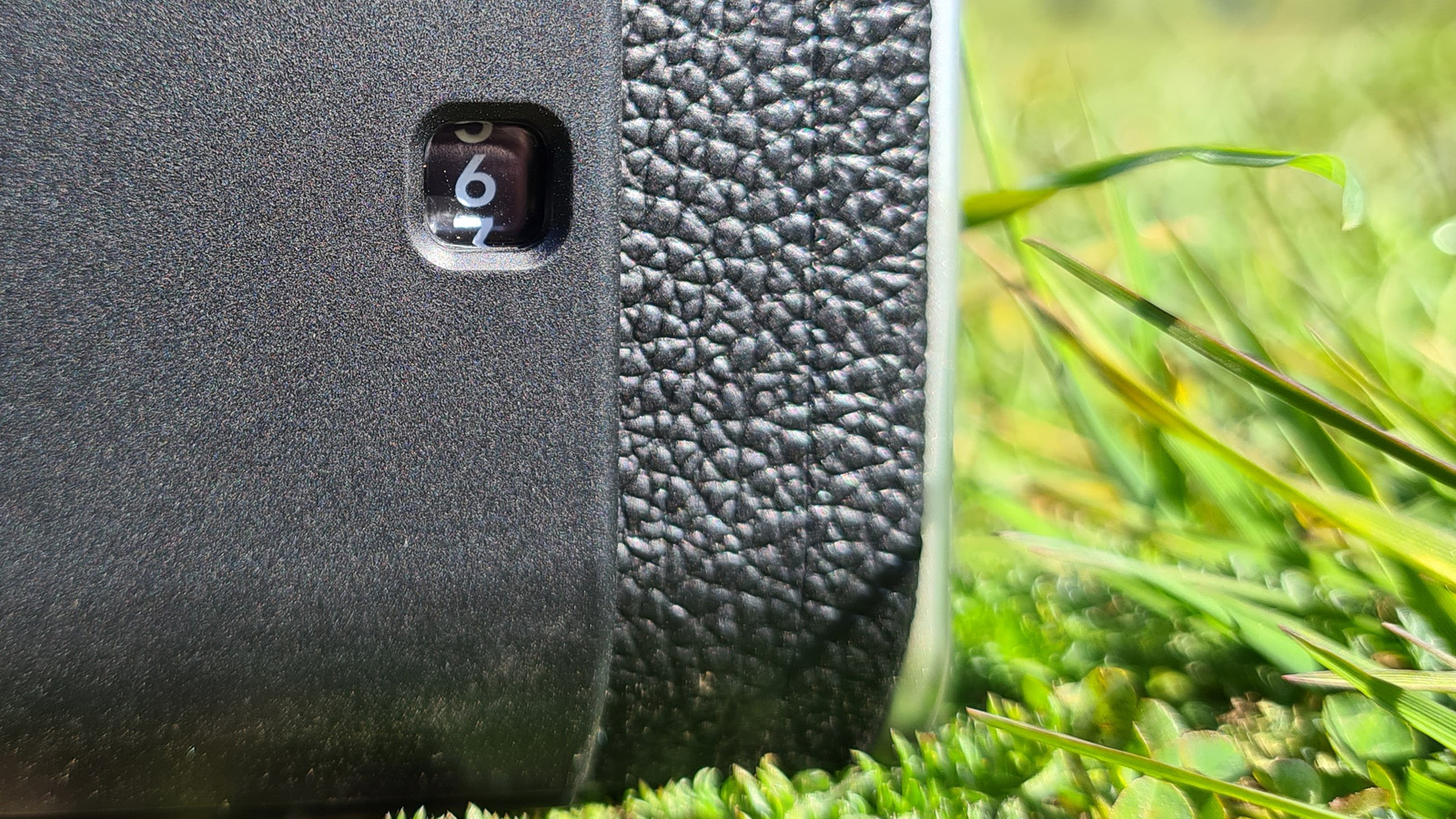 Each print is mechanically ejected through a slit at the top of the chamber and will take over five minutes to fully develop. Instax has the edge over Polaroid's I-Type film in this regard, though that's to be expected given the smaller size.

The flash fires every time you press the shutter button, regardless of lighting conditions, because the automatic exposure system is calibrated to expect it. You can vary the shutter speed between 1/2 and 1/250, so it should be able to cope with both bright and dark scenes, especially when shooting indoors.

It runs on two AA batteries, which typically last about 100 shots or 10 packs of film. You are much more likely to run out of film than power, but at least AA circulates more than the clumsy CR2 batteries Fuji used for its instant cameras.

If you've used an Instax camera before, the Mini 40's mix of dark shadows and pale highlights will look very familiar. They're not as dreamlike as rival Lomography systems, capturing finer detail without any light leakage.

Don't expect the extreme precision you'll get with digital, though: edges are soft parts, and darker parts of a scene often blend together. For best results, always shoot away from the sun, as sensitive film has difficulty exposing both well-lit skies and subjects that are in shadow. It pays to be selective with the composition in full sun, to avoid light reflections and reflections (Image credit: Future)

Autoexposure isn't foolproof, which can make some photos darker than you'd expect based on lighting conditions (Image credit: Future) The viewfinder offers an accurate representation of what the target will capture (Image credit: Future)

The combination of physical film and a fixed focus lens works best for portraits, because the further away you are from a subject, the less detail is preserved in the photo. This softness often works to your advantage, giving landscapes a more airy atmosphere.

If you shoot in sunlight, you should also watch out for ghost light, as the off-center viewfinder can make you think you have a well-composed shot, only to lose half the scene to overexposure. Fuji is not alone in this regard, and other instant cameras are equally to blame. 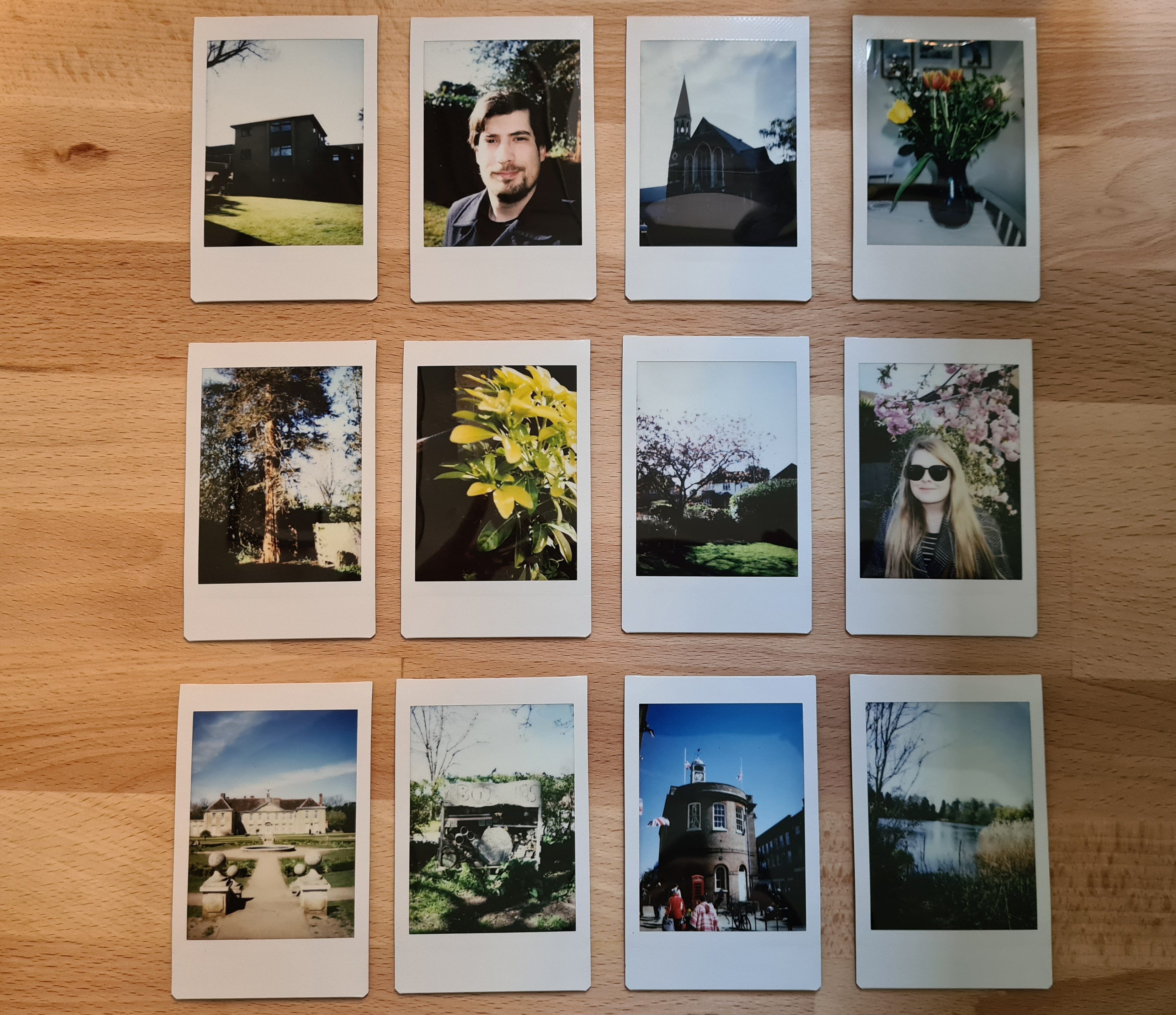 Forced flash naturally makes the biggest difference indoors, as it exposes both the subject and the background in a way that, while unnatural, does not leave large areas of the photo in the background. In our experience, not having to think about whether or not to fire the flash and letting the auto exposure system do its thing meant that a higher percentage of shots were developing as we did. On older Fuji cameras, a 20% (or more) wear rate was not unheard of.

There's no way to tell if the lens barrel extends from the back of the camera, and shooting landscapes in selfie mode is a quick way to get really blurry photos. However, it can be used to experiment with depth of field, especially when shooting indoors, and really improves the clarity and sharpness of selfies compared to the default mode.

The Instax Mini 40 is everything we love about the Instax Mini 11, uniquely wrapped in a bolder, more mature design.. If the Mini 11's toy-like appearance was enough to put you off, it should open the door to instant photography. Minimal buttons and no complex shooting modes make this a perfect entry-level camera for anyone new to instant film, the auto exposure system really takes a lot of the guesswork out of media.

Photos taken aren't perfect, with reflections just as easy here as on the Mini 11, but no more so than similarly priced rivals. The off-center viewfinder takes getting used to as well, but that's really the only real quirk of this camera.

However, is priced higher than the Mini 11, and since they're almost identical internally, we still think the camera is the best value overall. But if you don't mind paying more for a little more style, the Mini 40 remains a great option for instant newcomers.

Not convinced? Try these ... The closest competitor to the Mini 40 is almost as easy to use, thanks to an autofocus system that helps you avoid wasting film on blurry shots.. It's clearly retro-inspired, but also embraces a modern design, which some might prefer over the Instax. Most Polaroid cameras work with larger Type I film, which can be more expensive per shot than the Fuji system, but the new Polaroid Go has introduced a smaller format. Fuji's other entry-level instant camera has a similar feature set, but replaces the retro-chic build for a simpler, more modern look. It's a lot cheaper, having been around for a lot longer, but the ease of use and picture quality is exactly on par with the Mini 40. If you don't want to pay extra for the style, it's always a good time for instant cameras for beginners. The compact Zoemini looks more like a digital camera than an instant camera and has many modern features like a rechargeable battery and Bluetooth connectivity.