The new retro-inspired Nikon Zfc bears a resemblance to the company and is also internally practically identical to the old Nikon Z50. For the most part, Nikon has taken its existing DX model, embellished it on the basis of its FM2 film camera, and sprinkled it with a few more extras.

Paying more for something that looks a bit more modern is not new, and you could say that the Zfc is worth it for that alone; after all, appreciating holding your camera because you appreciate its look and feel is an essential part of photography. What other differences are there between the Zfc and the Z50? Is there something more than aesthetics that justifies the slight premium?

First, let's take a look at certain similarities. The two models share the exact same 29 MP APS-C sensor and exactly the same combination of image processing, so the image quality should be more or less exactly the same. There's also a shared focus system and pretty much exactly the same 4K video capabilities, as well as exactly the same level of protection against dust and weather.

The viewfinder of the 2 is a 0.39-inch 2370-dot XGA XGA OLED electronic device. More are other aspects of the exterior body design, handling and controls where the 2 models diverge; here are the main differences viz.

Nikon Zfc vs Z50: Getting Started

One of the biggest differences between the Zfc and the Z50 is the way they behave.

To give it a clean and very elegant finish, the Zfc has a flat face design, no grip to hold, or rest your thumb on the back of the camera. Although it looks really cool, it has the potential to be a bit slippery when using it. That's quite a marked difference fromto Z50 which has a deep, pronounced grip that helps the camera feel secure in the hand. There is also a fairly large thumb grip on the back of the camera. Hence, the Z50 will continue to be sold, as a more practical alternative option.

Another slight difference between the 2 is the differently shaped eyepiece that surrounds the viewfinder. In the Zfc it has a circular design, while the Z50 is quadrangular. This is one thing that Nikon took from the design of the FM2, in practice, it should only be an aesthetic difference, rather than affecting usability.

Have a body full of controls helps add to the analog look of the Zfc, and it also makes changing certain settings considerably faster and, indeed, more tactile.

The Zfc has 3 dials on top of the camera to monitor shutter speed, exposure compensation, and ISO sensitivity, giving you direct access to these settings. The ISO dial also serves as a mode dial.

2 command dials on the front and back of the camera control other settingslike the opening. Interestingly, there is a small window at the top of the camera that shows your chosen aperture, so you can quickly see it at a glance without looking at the back of the device. The Z50 is a considerably more basic item in terms of control, with just a mode dial on the top of the camera, as well as the standard dual command dials on the front and back of the camera. Other settings changed are made via buttons on the back of the camera in combination with menu options. 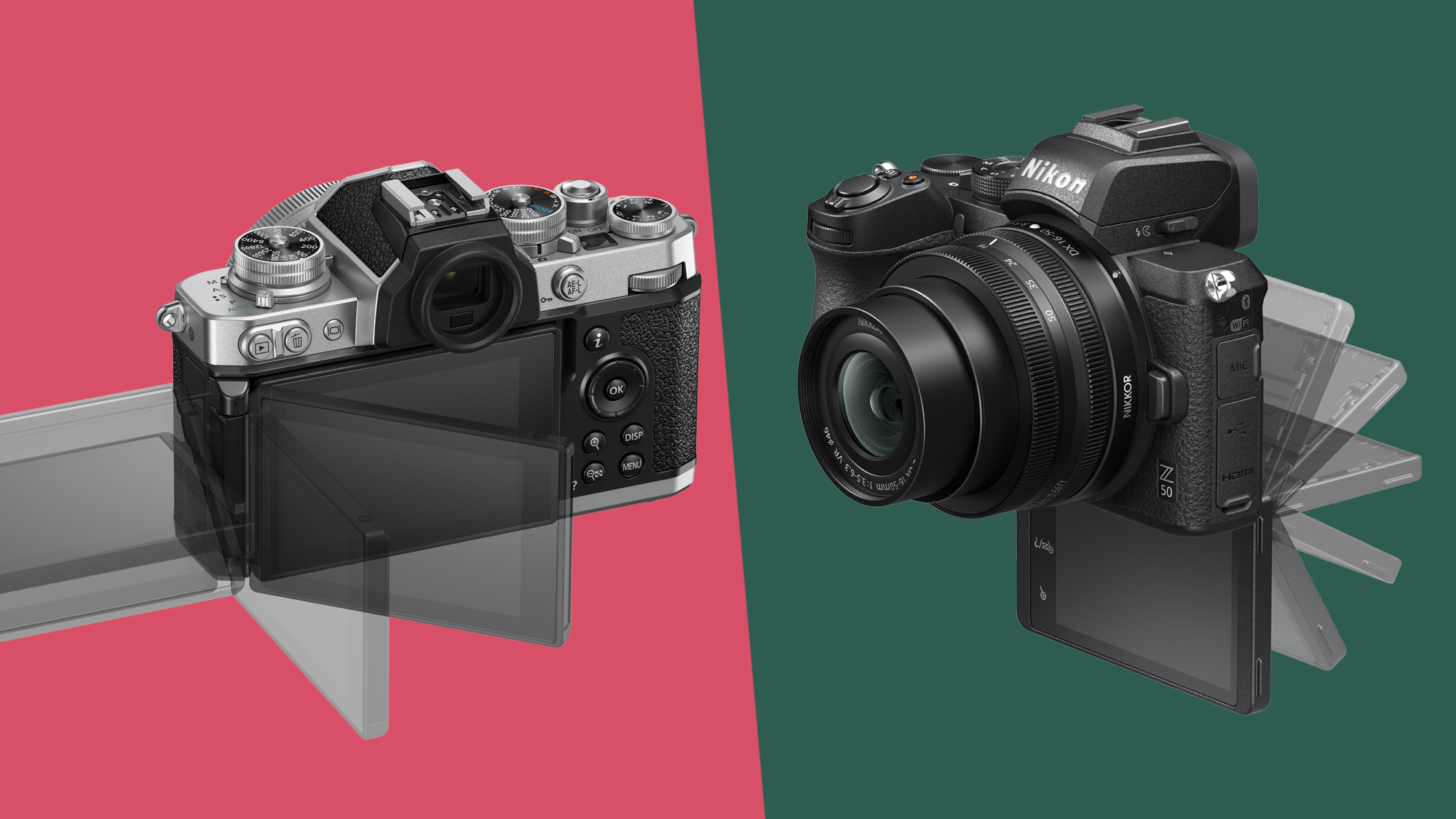 There is a difference here that is indeed more than just a matter of appearance. Yes ok the two cameras use a 1040-inch 50k TFT screen, the Zfc's screen has a vari-angle hinge, letting you position it more freely than the ZXNUMX's tilt option.

This probably makes it particularly appealing to vloggers who catch video content. The Z50's tilting screen can be tilted fully face-forward, but since the hinge is at the bottom of the camera, it cannot be used with the camera mounted on a tripod. Therefore, vloggers who wish to perform in front of the camera will favor Zfc's articulation more.

This is a small but significant difference. While the Nikon Z50 uses a Micro USB connector for charging, the Nikon Zfc opts for the more modern USB-C. The new type is faster, more robust, and more flexible than Micro USB, and it also aligns it with other devices you may have that use the exact same connection, such as smartphones, computers, and even other Nikon models.

Not only that, but the Zfc accepts USB Power Delivery, which means that can be used to power other devices when the camera is on and can also be charged in the field with an external battery.

Generally, the Nikon Zfc and Z50 have the exact same video specs, with both offering uncropped 4K recording at 30p, 25p and 24p.

However, a useful feature that has become popular in the Zfc of other Z models is the addition of Eye-AF for video. This is one thing that could happen to the Z50 via a firmware update, but for now, it sets them apart somewhat. An omission that will annoy some more than others, the Nikon Zfc does not have a built-in flash.

In reverse, the Nikon Z50 includes a manual pop-up flash, such as a series of flash modes, such as red-eye reduction.

Any new camera, regardless of its internal similarities with previous models, always and in all circumstances has a higher cost. Over time, we wait for costs to stabilize somewhat, but for now, if you are considering dual cameras, you will need to decide if the Z50 is worth saving money for.

Since these 2 models are practically identical inside, there is not much that separates them. If you're stuck in the middle, it probably comes down to 3 things: style, handling, and cost.

If you particularly enjoy the retro styles, direct controls, and handling of the Zfc, you'll be happy to spend the extra money to get your hands on it. In the meantime, if that doesn't matter so much to you and you might prefer the thicker grip of the Z50, you can save a good chunk of money by choosing the predecessor model.

Take a look at our full Nikon Zfc review soon.