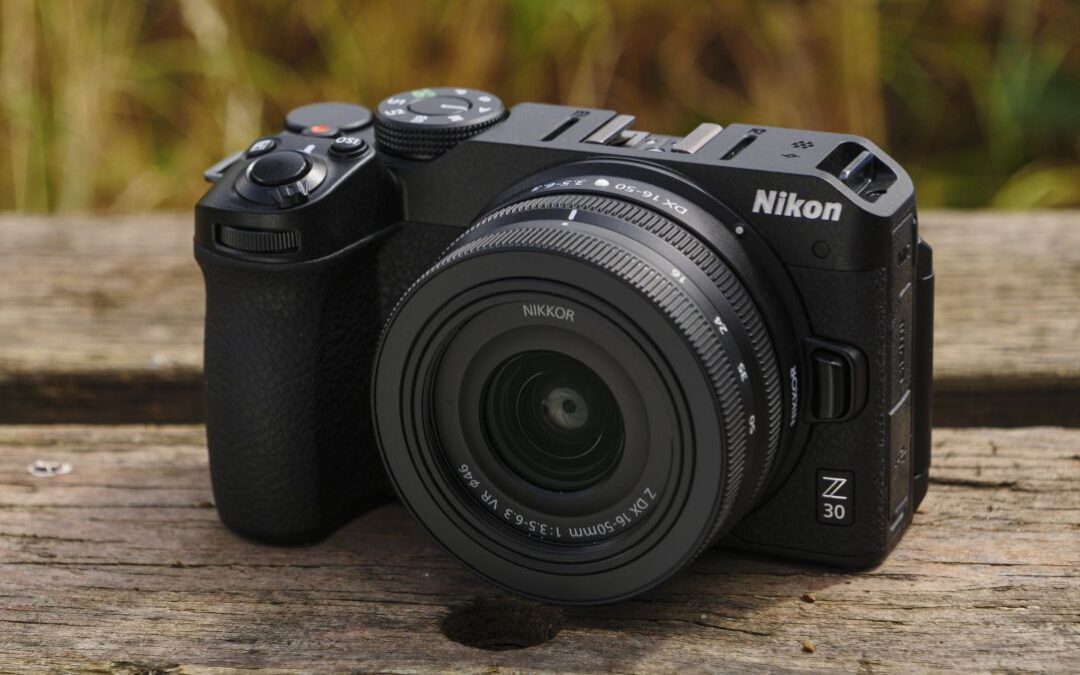 Nikon's full-frame mirrorless cameras may grab the headlines, but their APS-C system has now been perfectly complemented by the arrival of the Nikon Z30. Now that's three cameras and three lenses in total, but is three the magic number?

CPU power and build quality are also very similar, which is why we now have three APS-C cameras designed for entry-level photographers. So what is really different?

Just look at the cameras to see what's really different - each has its own take on the design. Of the three, the Z30 is poised to become one of the best cameras for vlogging, promising better quality and creative flexibility than a smartphone. If video and affordability are your priorities, it's also a contender for the title of best mirrorless camera for beginners. 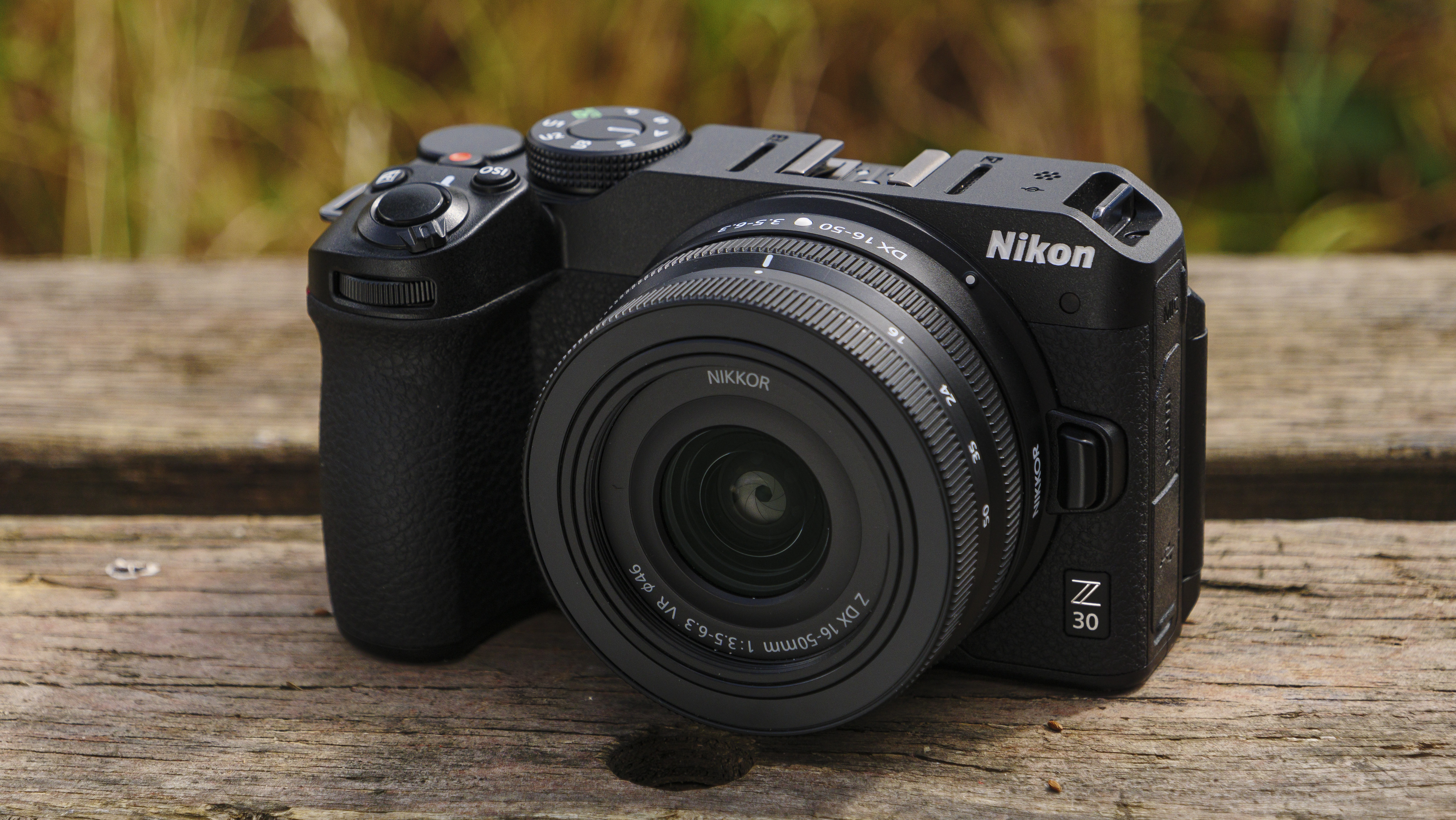 Since we already covered the performance and image quality of the Z30 siblings in our Nikon Z50 and Nikon Z fc review, most of this review will focus on the camera's design. After all, the Z30 isn't just for vlogging in the same way that the Z50 and Zfc are pretty capable vlogging cameras, too. (Plus, these optional vlogging accessories work for all three cameras.)

It must be said that three lenses for three cameras is a bad relationship, and we should see more glass for Nikon's system. To be fair, the 16-50mm is a great kit lens, and how many beginners actually buy additional lenses? There are also a handful of compact, compatible full-frame lenses that fit the bill, like the 40mm f/2 and 28mm f/2.8 (and the F-to-Z Mount Adapter if you're really stretching).

The lens roadmap rumor mill adds a 12-28mm DX lens to the mix that could become the best option for vlogging, along with a 24mm DX lens. But as it stands, there's no native ultra-wide lens for the Z30 and post-pandemic global supply issues linger if new ones emerge.

Nikon's stance on the Z30 is not helped by the fact that Sony's ZV-E10 rival already boasts a range of excellent APS-C lenses, including a recently announced trio of fast-aperture compact lenses particularly suited to vlogs.

Since both cameras have similar price points, your decision may be influenced by the discounts offered during the upcoming Black Friday camera sales. Although Nikon and Sony vlogging cameras happen to be too new to get deep discounts, we often see lenses get discounts on Black Friday deals. If Nikon's FTZ Mount Adapter and primers like the 28mm f/2.8 show up on sales, the Nikon Z30 may soon offer even better value. 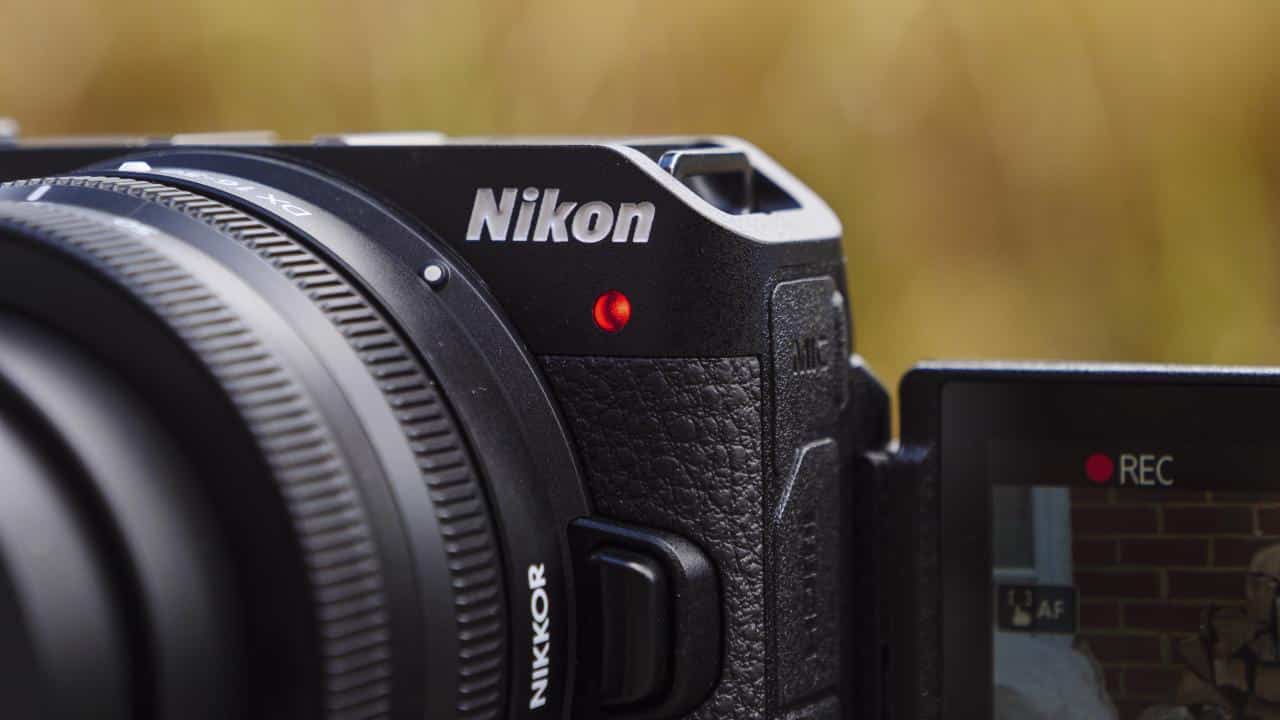 By excluding a viewfinder, Nikon was able to create its most affordable mirrorless camera yet, with some sensible kit options. Given that Nikon cameras were already competitively priced and the quality of the 16-50mm kit lens was decent, the Z30 is excellent value for money all round. 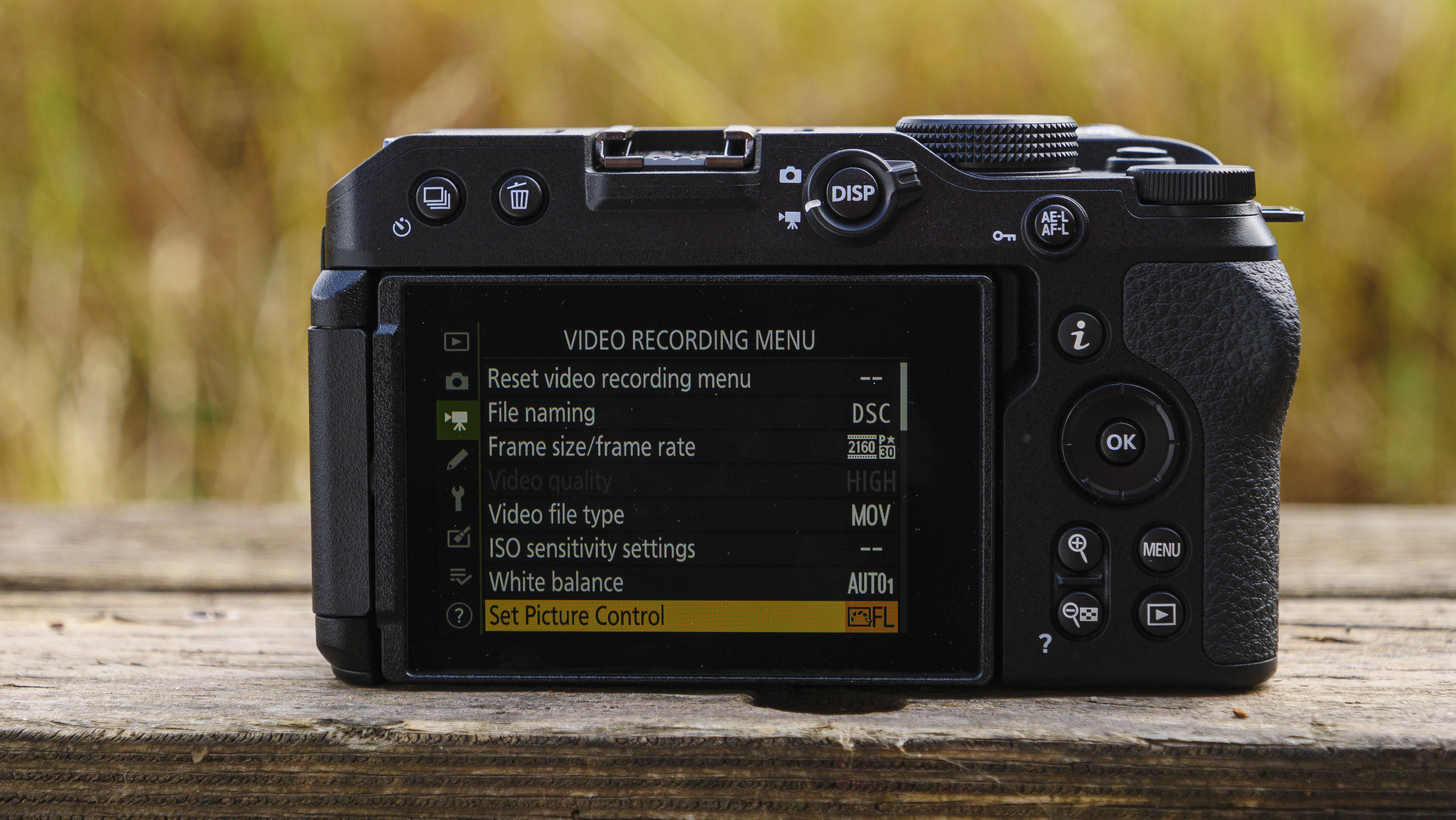 Think of the Z30's design as video-focused, the Z50's photography-focused, and the Z fc's as nostalgia-focused. In the Z30 we have a camera that bears a striking resemblance to the Sony ZV-E10. Of the two, it's larger and has a more defined grip, but it's still up there with Nikon's smallest full-frame mirrorless or APS-C camera to date.

More grips should be like this: it provides a great grip for taking pictures, but also for turning the camera towards yourself, with easy access to that big bright red button.

Videographers, including vloggers, compose through a screen and don't need a viewfinder (although you might miss one when taking photos). The omission of a viewfinder allowed Nikon to not only make its smallest APS-C mirrorless camera to date, but also its cheapest. Currently, there is no optional EVF (electronic viewfinder) available. 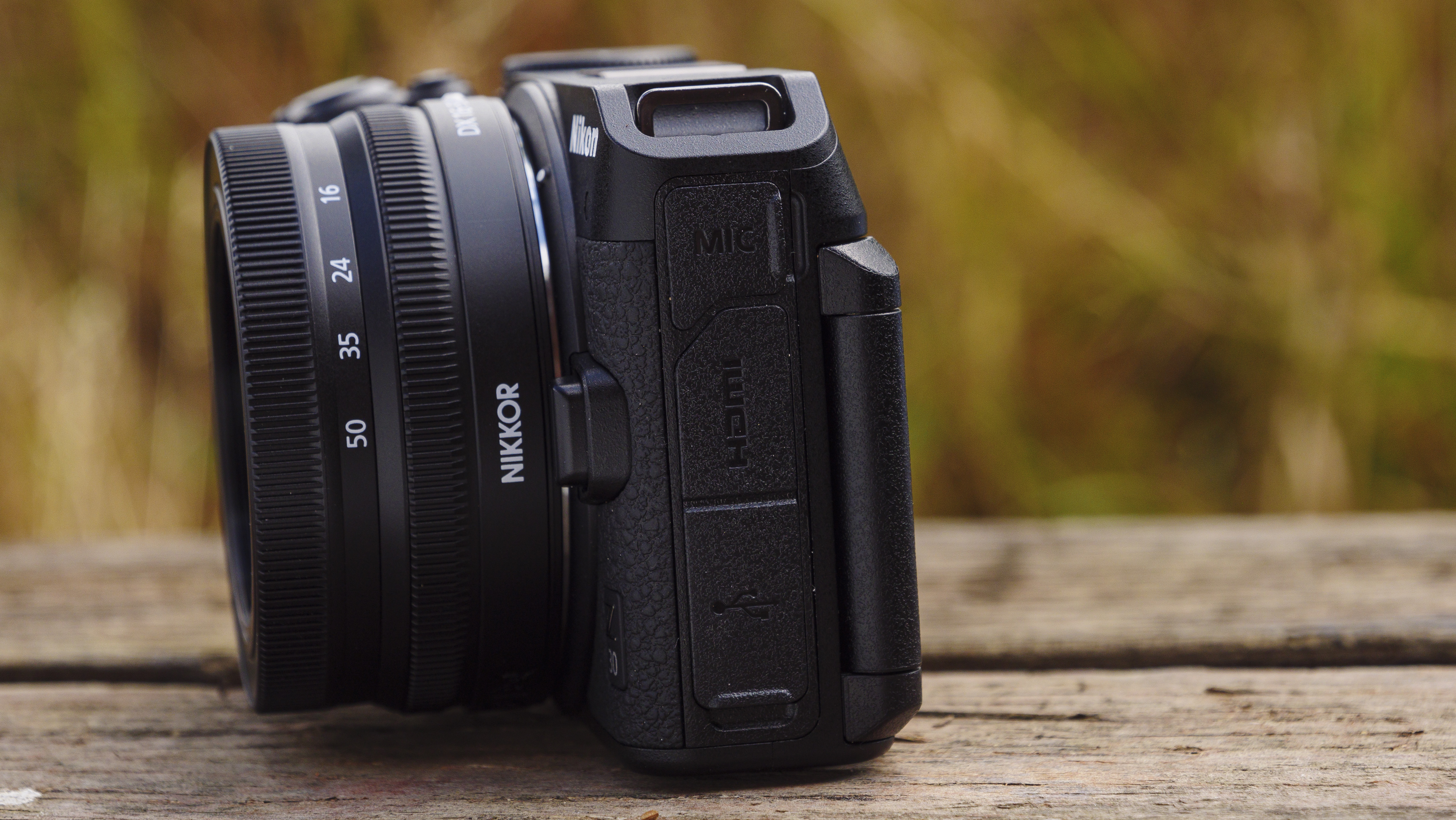 For its explicit purpose of vlogging, the Z30 is very well designed. This 3-inch vari-angle display performs brilliantly, with the full range of touch functions, including focus, playback and menu navigation at your fingertips. A red border indicates video mode, while a pointing light lets you know the camera is recording video, conveniences not found on the Z50 or Z fc.

Nikon's 16-50mm kit lens offers vibration reduction for stills, while in-camera Electronic Vibration Reduction (E-VR) for video gives you a little more stabilization for handheld shooting, though it's not available for 120p slow-motion video. There's a 1.3x crop with E-VR in play, which isn't ideal if you need to shoot at wide angles. Serious run-and-gun vloggers may want to invest in a gimbal and keep the E-VR turned off.

A stereo microphone is built in and provides reasonable sound quality for those times when you don't have an external microphone. It's an improvement over on-camera mics, plus there's a wind reduction feature and you can put an optional dead jack on the stereo mics that mount on either side of the hot shoe. 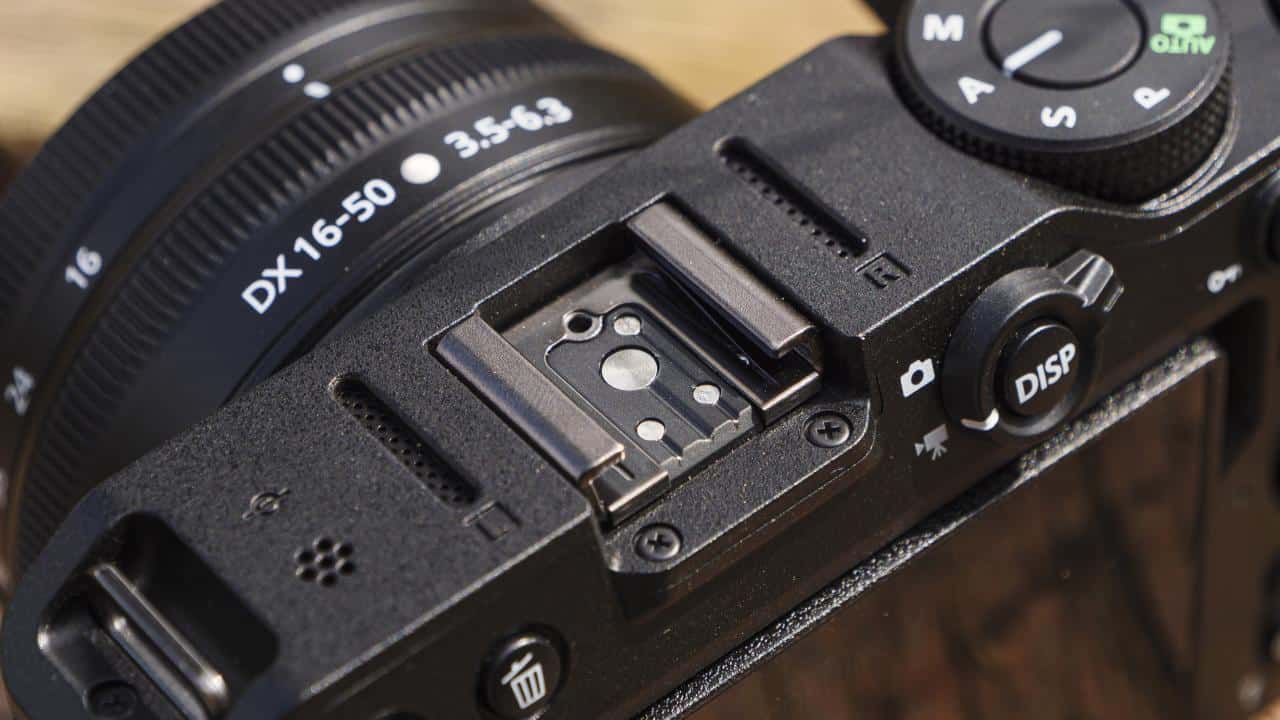 These stereo microphones are suitable for quiet spaces, but we still recommend an external microphone for vlogging to ensure the best possible quality. As the video industry says, bad pictures are forgivable, bad sound is not.

In that sense, it's a real shame there's no headphone jack in addition to the mic input for audibly monitoring sound. On-screen audio levels just aren't the same as listening live or reviewing a recording on location after capture, and we couldn't find a way to display those audio levels when the Z30 is in selfie mode. The last thing a video maker wants is to come back from a shoot only to find unusable audio.

Battery life is average, if a bit modest, and there's no dedicated battery charger that comes with the camera, just the USB-C cable. One big advantage of the Z30, however, is that it can be charged via its USB-C port at home, on the go, and even while using the camera. Yes, USB-C charging works during live streaming and video recording. Great victory.

Virtually all modern cameras offer 4K video, but the quality of 4K varies. For example, 4K on the Z30 (and indeed its 120p HD slow motion setting) is shot across the width of the sensor, meaning there's no cropping. It's a godsend for vlogging against the backdrop of the lack of wide-angle APS-C mirrorless lenses - you can retain the full field of view of the 16-50mm lens.

There are also unlimited video recording times on the Z30, unlike the Z50, Z fc and many others which are limited to 30 minutes. We say unlimited; ultimately it depends on the capacity of the card, and Nikon quotes around 120 minutes.

Arguably one of the most important camera features for vlogging is the reliable continuous autofocus and face detection AF. Overall, the Z209's 30-point phase/contrast detection AF (also found in the Z fc and Z50) doesn't quite match the Sony ZV-E10's autofocus performance and versatility, but it is more than enough to follow a self-timer.

With the vari-angle screen facing forward, the camera switches to selfie mode and recognizes your face and AF tracking reliably sticks to it. For other subjects, especially when the screen is rear-facing, AF tracking is still respectable, but can be a bit less reliable. Dedicated AF modes with vlogging in mind would also be welcome, such as Sony's 'Product Showcase' mode.

It is important to share our experience connecting the Z30 to the Nikon SnapBridge app (Android version) for remote camera control and image uploading, and the Nikon Webcam utility for live streaming. In short, the Z30 provides a smooth and reliable connection to the SnapBridge; that's not to be assumed or underestimated, as not every system (ahem, Sony) can say the same thing.

Photographers can shoot high-speed images up to 11fps in "extended" mode, with continuous autofocus and autoexposure. In this mode we were able to save 30 RAW and JPEG images to a high-performance UHS-I SD card before the camera shut down and takes a while to get back up to full speed.

Continuous High mode is slower at 5fps where you can sustain a burst for longer, again with a bit of a wait to shoot at full capacity again. It's the kind of performance...