The Death of Internet Explorer: Getting Rid of Bad Junk 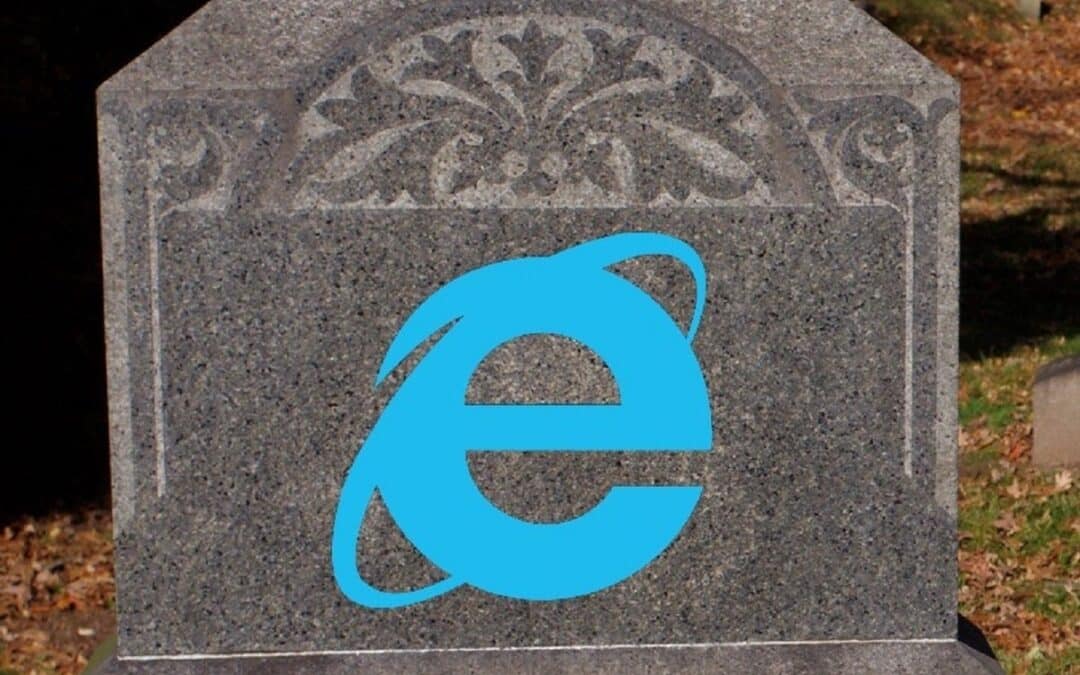 Today, finally, Microsoft officially ends support for Internet Explorer. Goodbye and good riddance to the most annoying web browser of all.

Back in 1993, when I wrote the first story about this cutting-edge thing called the WEB, I knew it would be huge. It's more than Bill Gates thought at the time. At the 1994 Comdex, Gates said: “I see little commercial potential for the Internet in the next 10 years.

Well, he ended up being right. But neither he nor Microsoft were the first to release a web browser. Away from!

Mosaic, however, was the first browser that allowed you to view images on pages. It changed the game. Previous browsers could only display images as separate files. It wasn't a contest: Mosaic won the first and oldest browser war.

A day late and a dollar short

In 1995, Gates realized that Microsoft needed something to offer all users who desperately wanted a web browser. In May 1995, Gates started saying things like "The Internet is the most important development since the introduction of the IBM PC in 1981" and compared it to a tidal wave.

Tidal wave or not, Microsoft wasn't ready yet. His quick response was to adopt Spyglass, a commercial version of the popular Mosaic web browser. It was the basis for Internet Explorer (IE) 1, which debuted in August 1995, as part of Microsoft Plus for Windows 95, a Windows software add-on.

IE 1 was a flop. It also created bad blood with Spyglass, which had been promised a percentage of Microsoft's profits from IE. But Microsoft started bundling IE with Windows, and thus didn't make a profit. Microsoft finally settled with Spyglass for €8 million in 1997.

This Spyglass/Mosaic codebase will remain in IE until IE7 is released. The "About" window in IE1 through IE6 contained the text "Distributed under a license agreement with Spyglass, Inc." Some claim that Microsoft innovated with IE. This was not the case.

At the same time, Andreessen took the Mosaic code and turned it into the first successful web browser, Netscape. Andreessen bragged that Netscape would "reduce Windows to a set of poorly debugged device drivers."

netscape in line of sight

Microsoft took the threat seriously. Netscape CEO James Barksdale would later testify that at a meeting in June 1995, Microsoft proposed that the two companies split the browser market, with Internet Explorer being the only Windows browser. If Netscape didn't comply, Microsoft would crush it.

“I have never been in a meeting in my 33-year business career where a competitor so blatantly suggested that we should stop competing with them or the competitor would kill,” Barksdale said during the 2001 Justice Department antitrust lawsuit against Microsoft.

Despite this caveat, Netscape continued to lead the technological revolution. Netscape Communicator was where the real innovation happened. JavaScript, for example, is possibly the most popular programming language in the world, and JavaScript was the brainchild of Netscape. But Microsoft, in all honesty, has also had its moments. For example, IE 3.0 was the first browser to adopt Cascading Style Sheets (CSS) in 1996.

But the real reason we're only saying goodbye to IE today, long after Netscape made history, is that Microsoft exploited its illegal PC/Windows monopoly to block Netscape from computers. Microsoft's heavily armed PC vendors are installing the new operating system and browser on all of their PCs. The goal wasn't so much to shut down other PC operating system vendors; there was no real OS competition in the mid-90s. The goal was to destroy Netscape.

The courts agreed. The Justice Department won the lawsuit against Microsoft because the company's monopoly on PCs prevented Netscape from competing with IE. Unfortunately, the government slapped Microsoft on the fingers rather than split it into separate companies or open source it. And Netscape is dead, as Microsoft threatened in 1995.

This is how many of you grew up with IE as the browser you knew and loved. You didn't know any better.

Not with a bang but with a groan

Microsoft stopped innovating with IE, especially after it released IE6 with Windows XP in 2001. Why bother? Users were going nowhere. They really didn't have an alternative. In the mid-2000s, IE's market share regularly exceeded 90%.

But finally, Firefox, based on old Netscape code, became a viable alternative around 2005. However, the true end of IE began when Google decided to create a modern, fast and efficient web browser, Chrome, in 2008.

Microsoft never caught up. Currently, Microsoft's modern browser, Edge, is based on Chromium, the open source codebase for Chrome. In fact, with the exception of Firefox, all major Windows web browsers today are based on Chromium. Edge offers a feature called IE Mode, which uses the Chromium engine for modern websites and IE11's Trident MSHTML engine for legacy sites designed to work with Internet Explorer.

IE itself? They left him to die of abandonment. Despite this, people still use IE today, God help them! The US Federal Government's Digital Analytics Program (DAP) reports an average of 300 IE visits to government sites in the last 000 days.

Although support for IE11 in Windows 10 ends on June 15, Microsoft isn't just killing it off entirely. No, the IE11 desktop client will be rolled out to Windows 8.1 and Windows 7 (and even Windows 10 Enterprise, version 20H2), with Extended Security Updates.

Also, IE mode in Microsoft Edge will continue to be supported until at least 2029. So yeah, those wretched IE-only websites and apps will still work for years to come. This means you don't want to uninstall IE yourself. Edge will always use this feature when it comes across an outdated website. Microsoft also said that IE desktop apps will be gradually redirected to Microsoft Edge for now.

When will IE really be buried? We do not know. Microsoft does not say. One day, though, you'll get a Windows update that will wipe IE once and for all.