iPadOS 16: What you need to know about your next iPad update 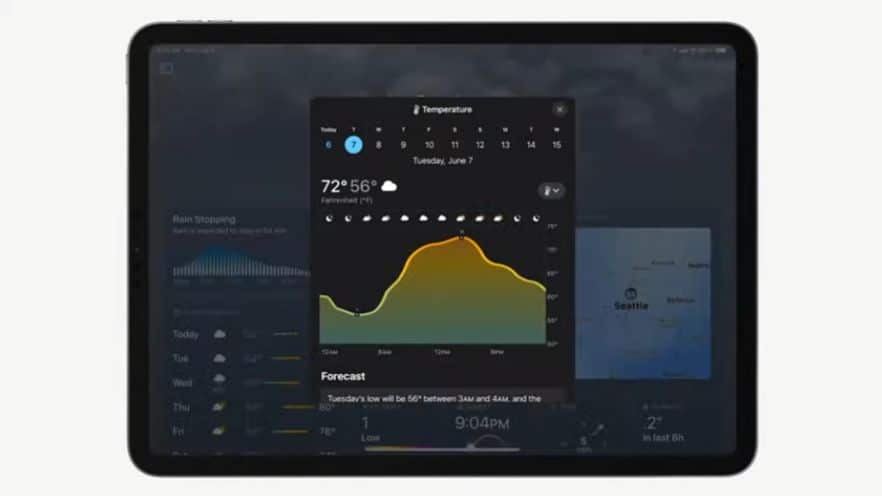 The next software update coming to your iPad will be iPadOS 16, and we heard the first details about this next set of features thanks to the WWDC 2022 keynote.

It is the fourth generation of iPadOS, as Apple separated it from its iOS smartphone operating system, saying that iPadOS 16 shares many features in common with iOS 16.

These include changes to the lock screen, allowing you to see more notifications and better customize what you see on your iPad before it unlocks.

Another comes from Apple Maps: you'll be able to create a route in the app, even with different stops and routes, and send it to your iPhone. This allows you to plan your trip on the big screen before you see it on the small one.

There's also a macOS feature coming, and it's a tweak to the Mail app. Now you'll be able to schedule emails to be sent at a certain time, retract emails you just sent, and set reminders for emails you don't want to deal with. immediately.

Apple's new Weather app is also coming to the iPad, if that's something you're interested in.

Collaboration is an important goal, so when you share a document (from certain apps) with your friends or colleagues, you'll now be sending the actual document, not a copy; then you can use FaceTime to work on it with other people. . It's basically like the Google suite, but… not from Google.

An upcoming app called FreeForm has been detailed, though it's coming to iPadOS 16 later this year. It's basically a common digital bulletin board or shared version of the Notes app, so you can draw and jot down ideas, and other people can collaborate on the board too.

One creative app to come is Benchmark Mode, which aims to maintain the color accuracy of your iPad screen compared to other devices, which would be useful for color calibrators, though Apple hasn't given much detail about what that means. really does.

Apple also promised to update more of its own apps to make them "desktop class," though this seems to involve hundreds of small tweaks rather than one massive change. It makes sense, though, because iPadOS essentially feels like a giant version of iOS right now.

After detailing the Mac's gaming prowess earlier in the presentation, we've heard that the iPad will get a lot. This includes a feature called Metal 3 that automatically transforms game footage (basically adds frame rate and resolution), and now Game Center gets an activity list so you can see what your friends are up to; it is very similar to the features that exist. on many other gaming networks like Xbox Live and PlayStation Network.