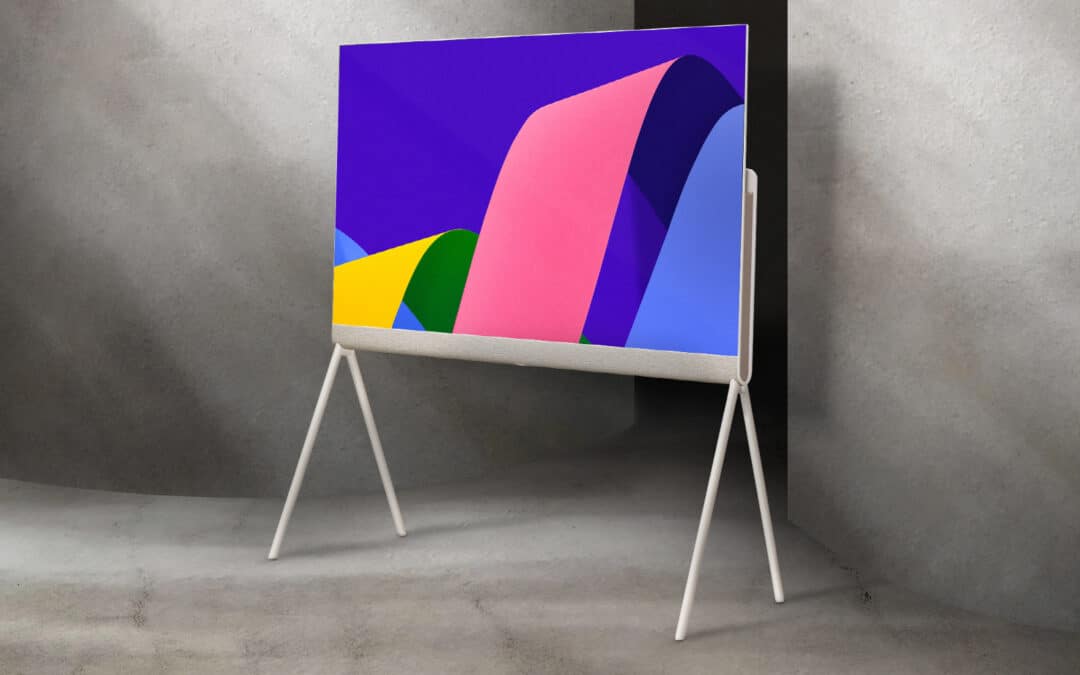 LG has unveiled its next OLED TV model, including its second 42-inch OLED TV option, and it's a welcome change from the company's usual minimalist approach to its TVs. The LG Posé series, also known as the LG LX1, features a thicker fabric-covered design with a built-in kickstand, and is designed to be more of a centerpiece to a room than just a piece of tech stored on the wall, or leaned on. by way of apology in the corner.

Covered in the Kvadrat fabric commonly used in speakers (due to its high-end feel, but without compromising acoustic performance - useful for audio wannabes on set), the LG Posé's design focuses on the screen from the ground up. front, but with a touch of fabric and the frame at the bottom, which wraps in a U-shape around the bottom, then goes up in the back about two-thirds of the way.

Our favorite touch is that it then forms a shelf, so you can use the back of the TV as a little magazine rack, a playback station for your vinyl or Blu-ray boxes, or just to put some photos you want. .

It reminds us that the Posé (pronounced "pose-ay," also a ballet move in which the dancer walks confidently and gracefully on one straight leg) is designed to stand in the middle of a room, viewed from all angles. From the back and sides, it looks like a piece of furniture designed with aesthetics in mind; From the front, it's a stylish TV and you can use LG's Gallery mode to fill it with art when you're not showing movies.

The legs also include a cable management system, making it easy to discreetly run power and a connection to any of the best AV receivers.

The TV section itself is a 4K OLED Evo panel, which means it includes the LG Alpha 9 Gen 5 processor, as well as Dolby Atmos, Dolby Vision and HDMI 2.1 support. It is available in 42-, 48-, and 55-inch sizes; think of it as a super-sleek LG C2, but probably with a higher price tag.

The LG Posé (along with the 65-inch LG Easel, which was already revealed late last year) will be fully revealed at the Milan fashion show, starting June 7, 2022, where we expect to know the price and the release date.

For a long time, the approach to TV design has been to try to pretend they're not there: make them as thin as possible, with bezels as small as possible. And with the ultra-thin technology of the best OLED TVs and the new mini LED TVs becoming more popular, the best TVs are thinner than ever! What is… good? Suppose?

The huge popularity of Samsung's The Frame TV shows that perhaps not all TVs should follow this particular evolutionary path. No matter how hard you try to pretend a TV doesn't exist when it's off, it does. It's a big rectangle! So, if the physical and aesthetic space is going to be occupied, why not take advantage of it?

Frame TVs have a thick border with a prominent edge to mimic a picture frame, an object we're all familiar with in the living room, so the TV blends in nicely drawing attention to itself.

New TVs like Sky Glass or Loewe actually have bright, vibrant colors visible in their design, so they can be part of a modern tonal look, complementing the room.

So it's great to see LG leaning into that too. The Posé combines the legs of a mid-century sideboard with the modern Scandi fashion for fabric-covered speakers. And it's the first TV we can think of in a long time that has a practical purpose outside of the screen: the shelf on the back may be a nice little touch, but it's rare that TV designs entertain the idea of ​​their piece contains… well, something else. Hoping this is just the beginning.