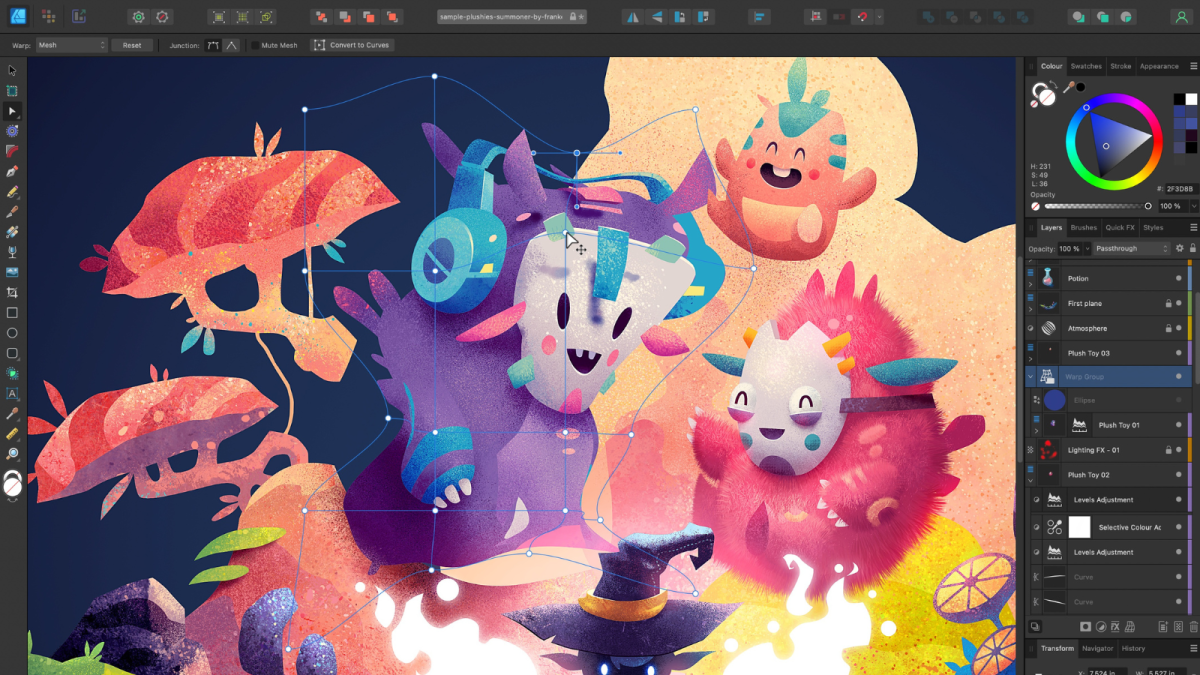 Creating images, whether it's a piece of art, a logo, maybe even a simple icon, can be quite a complex operation. Therefore, the best graphic design software is often priced to reflect this.

Of course, there are always exceptions, and one of them is Affinity Designer without a subscription.

With a massive version 2.0 update coming, let's take a look at what makes the creative design tool tick...

Fortunately, Affinity Designer is cross-platform, with versions available for both Mac and Windows. You'll also find an iPad option, but that's not the focus of this particular review.

Affinity Designer supports Intel and Apple M chips for Mac and a 64-bit processor for Windows. Each platform requires a minimum of 8 GB of RAM (the more the better, like all apps), and between 1 GB and 3 GB of storage space upon installation.

It's extremely attractively priced at €70/€60, although to celebrate the new release you can grab a copy for just €41/€36.

And no, it is not a subscription, but a one-time payment. When you consider that Adobe Photoshop or Illustrator each cost $21/$20 per month with a Creative Cloud subscription, the savings become apparent extremely quickly.

There's also a new "universal license," which combines Designer with Affinity Photo and Affinity Publisher. You can then use them on Mac and Windows devices. It also includes iPad versions of Serif's graphic design, photo editor, and desktop publishing software.

All of these can be yours for €170 (or €100/€90, provided the celebration discount is valid). If there's a downside here, it's that existing users don't get a discounted upgrade path.

If you're curious about what's on offer but don't want to shell out the money just yet, Serif also offers a 30-day free trial for Mac and Windows.

This software is affordable, but that's only part of the story. How good is Designer when it comes to compositing images? 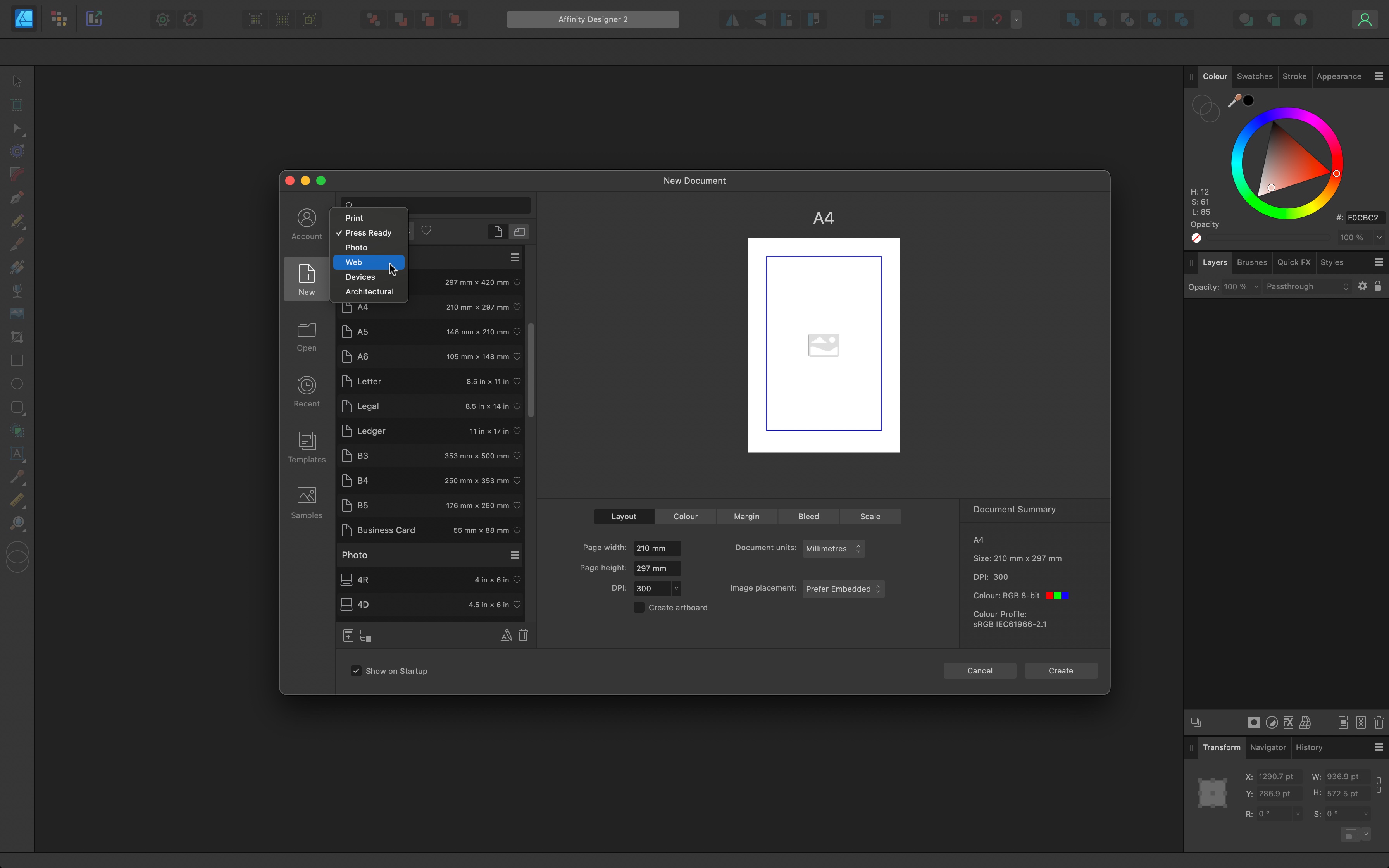 The new document dialog is much more versatile, especially thanks to its live preview and 'Recent' section (Image credit: Serif)

Since Affinity Designer 2 is fresh out of the box, it makes sense to focus on what's new and different.

First is the Document dialog, which gives you access to templates, swatches, and preset canvas sizes. There's also a handy "Recent" section, which is a great way to locate documents you've been working on.

An interesting feature is the preview of the document it generates. Whether it's one of the sample sizes or a custom layout, you'll see a representation at the top right of the window, with margins and bleeds.

As for the interface, although it looks similar to the previous version, it has been modified in many aspects and all the tool icons have been redesigned. But it shouldn't take you long to get back to it. One of these improvements is the Layers panel, which now displays a default object type. This allows you to see at a glance whether a layer is a curve, a raster, a group, an adjustment, etc.

You'll also find many powerful new tools, and we'll explore some of our favorites.

Affinity Designer is a remarkably interesting program as it tries to mix vector shapes with raster graphics.

To do this, he uses what he calls “People”. He has 'Designer Persona', where he works with vectors, but can switch to 'Pixel Persona' at any time, where he has access to all the usual raster tools.

Affinity Designer 2 introduces a tool that has been requested for years and was sorely lacking in the previous version: a Shape Creator.

The way it works is very elegant and simple: create overlapping shapes, then activate the tool and have it remove certain sections of your design or blend others. In no time, you've created a complex shape from a series of basic shapes.

The rendering is excellent, visually clean and easy to understand, and it won't take long for anyone to master it, which will speed up your designs a lot. 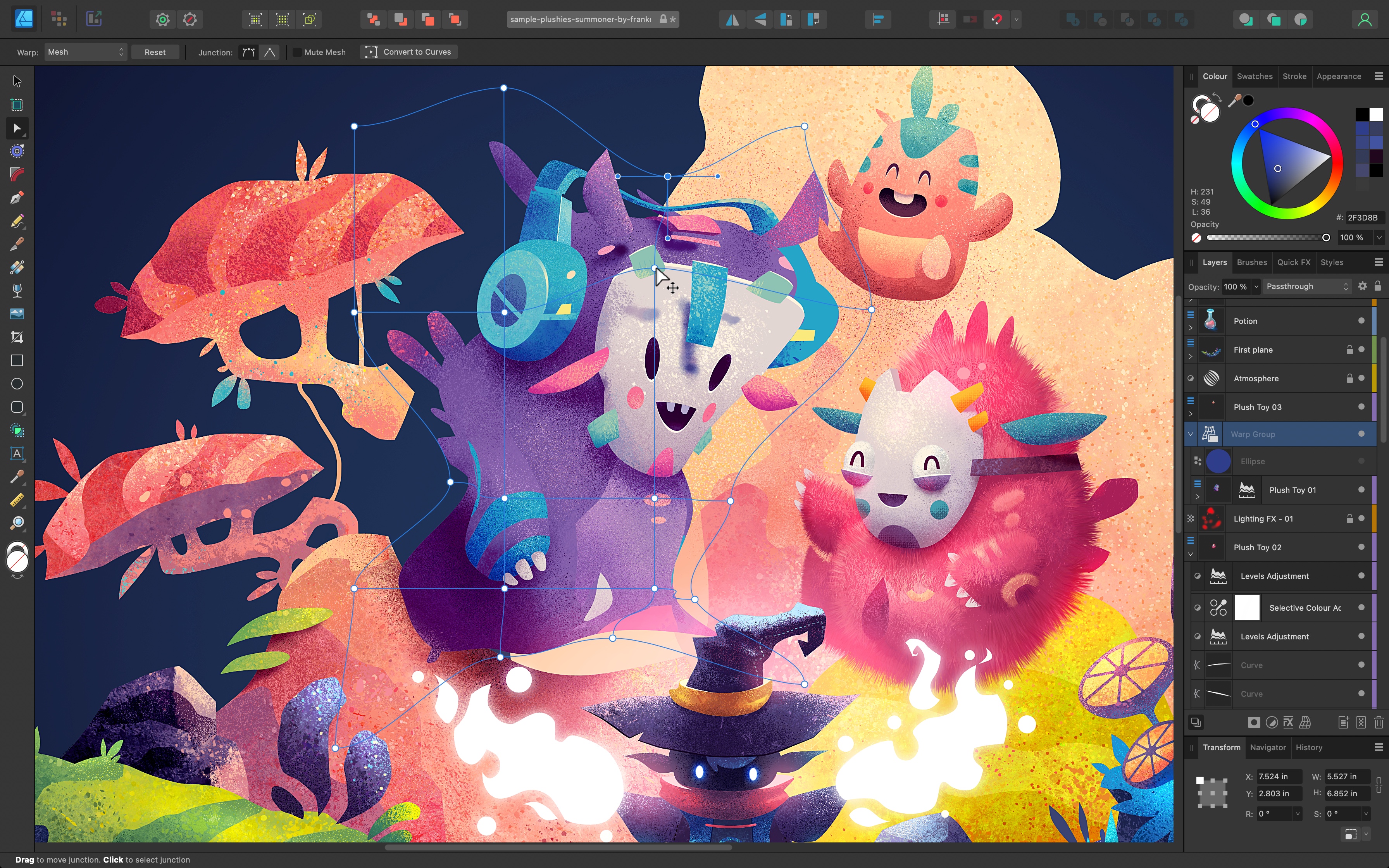 The new Warp Tools are incredibly powerful and remarkably easy to use. What can you not love? (Image credit: Serif)

The new Warp tools are perhaps even better than a Shape Builder. This was another highly requested feature, now part of this latest version. It allows you to warp shapes or group layers using vectors, and it's incredibly easy to use.

Creating curved text, for example, was a challenge in the previous version, but now complex changes and modifications are just a click and drag away.

Mesh is perhaps the highlight of Warp. When on, a grid is placed over the selected object. Dragging the dashed points along the grid distorts the object below. You can add more points anywhere on the grid to refine your edits.

If you apply these warp edits to a layer group, adding another object to that group will instantly apply its warp to it. It is incredibly intuitive and easy to use.

Once you're done, you can convert any deformations to vector curves, if you like. 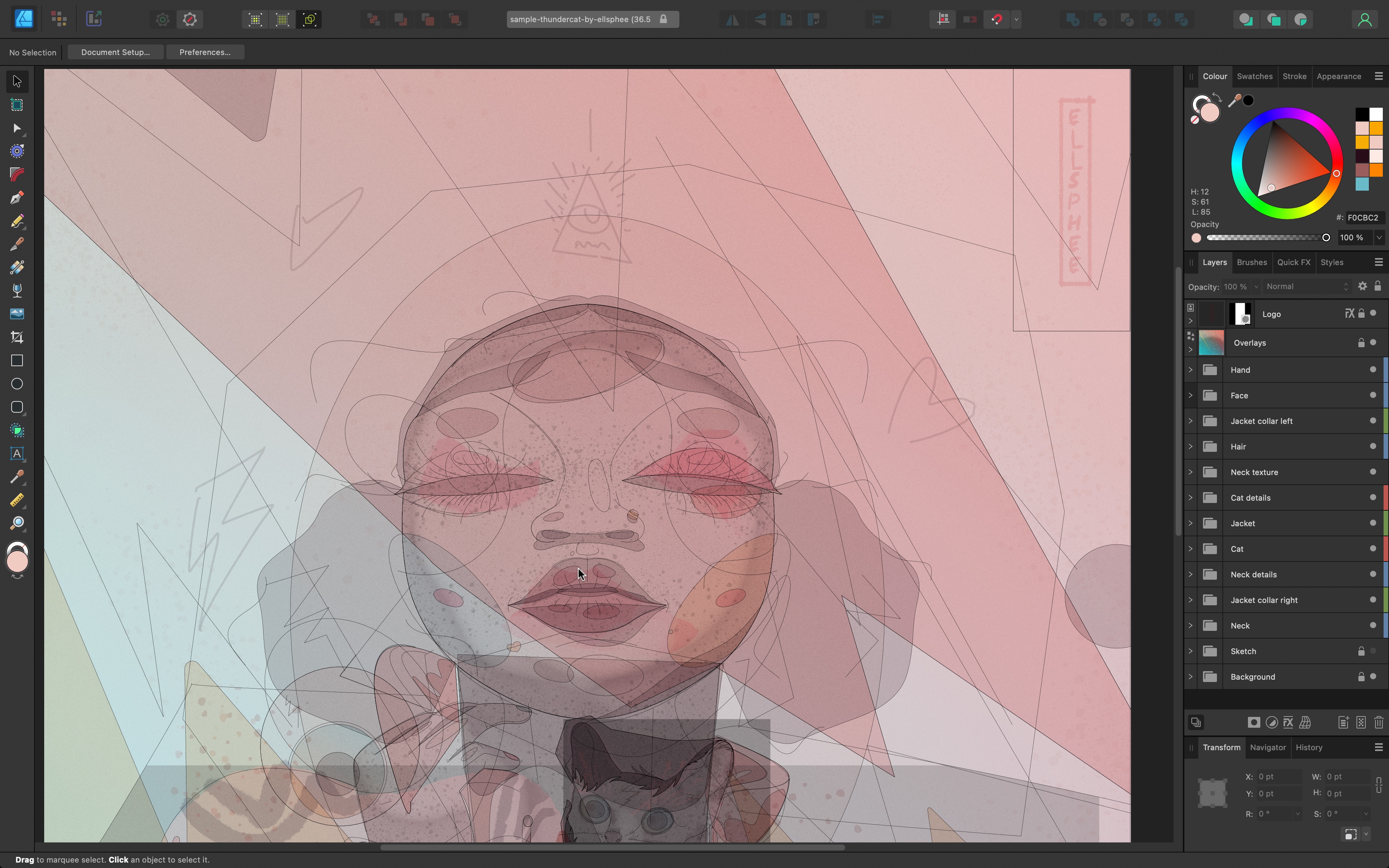 When working with a complex image, Wireframe can end up being too confusing. This is where the new X-ray view could come in handy (Image credit: Serif)

This update contains many new and improved features. However, honorable mentions go to a new type of wireframe view, called X-Ray mode. It doesn't replace Wireframe, but it's a new addition to your list of options. When working with complex images, this can make it easier to distinguish one curve from another. Always practical.

The Knife tool is also a lot of fun. As the name suggests, you use it to drag an object by dragging it, allowing you to customize a generic shape in seconds, again, all with vector points.

Below the color picker is now the style picker, which can save you a lot of time, allowing you to effortlessly copy the style or an existing object by clicking on it (you can also select which parts of the style to transfer and which to remove), and copy it to another, simply by clicking on it. Effortless.

The new knife tool lets you turn a generic shape into a complex one in seconds (Image credit: Serif)

The new Quick Grid allows you to add multiple copies of the same shape in a grid-like pattern on your canvas. A great time saver.

If you work with AutoCad files, you'll be pleased to know that Designer now supports these file formats, converting data into vector shapes and allowing you to modify them at will.

Finally, we'll dive into the raster side of things to show that while the vector tools are definitely where they are with this release, this section of Designer hasn't been completely ignored.

You'll find many improvements with the brush tools in Pixel Persona, including better tip precision, support for wet edges, and the ability to view brushes as a stroke or nozzle thumbnails.

The only thing that surprised and disappointed us on the Mac side of the equation was the lack of support for that operating system's autosave feature. It was a headache when version 1.0 came out eight years ago, and now it feels like a frustrating omission.