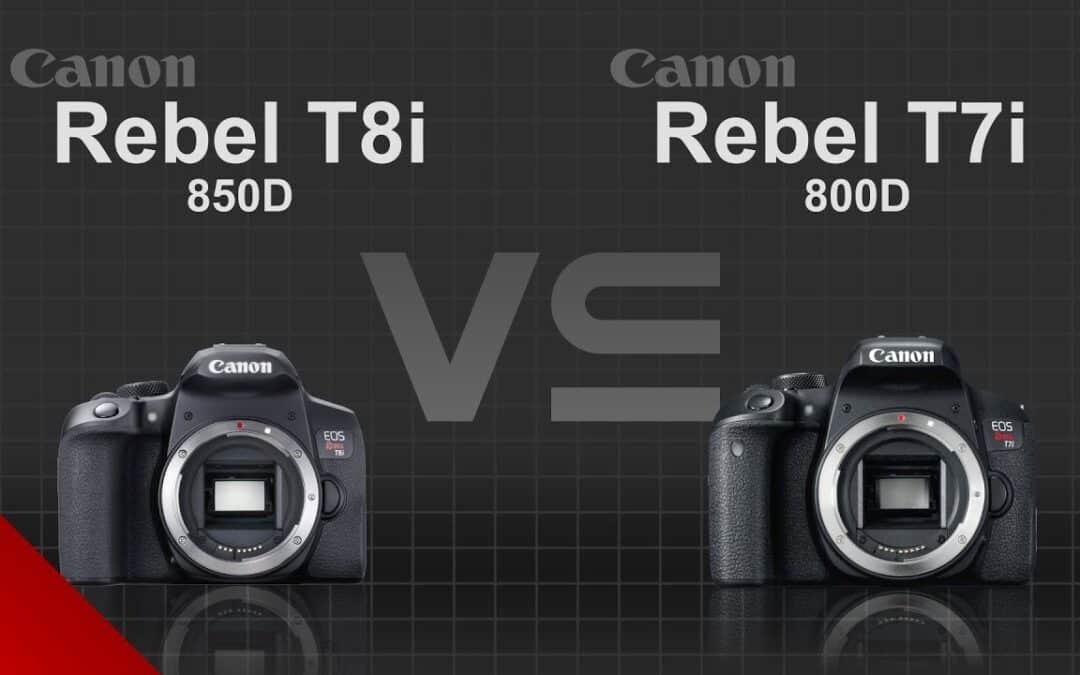 The Canon EOS 850D (known in the United States as the Rebel T8i) is the sequel to the EOS 800D (Rebel T7i) that was released in 2017. Attention from the world of ; the camera may have switched to mirror, but many people prefer DSLRs, so is the 850D a pretty significant upgrade from its predecessor?

The most obvious upgrade is 4K video capture, but the 850D also brings a multitude of smaller and more subtle upgrades, including a new processor, which should improve your overall shooting experience.

These two cameras look almost identical, have the same pentamirror viewfinder magnification and 3-inch vari-angle touchscreens. Then, what else is different and is it enough to convince you to trade in your EOS 800D / Rebel T7i? 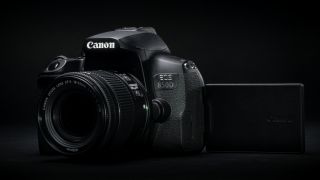 Those hoping for a major sensor upgrade may be disappointed with the Canon EOS 850D / Rebel T8i. It has a 24.1 MP APS-C sensor compared to the old 24.2 MP chip in the 800D. This is the number of "effective" megapixels, and the total sensor for each is 25.8 megapixels.

You get the same sensor area and the difference in resolution is minimal. We expect the EOS 850D to have the same chip as the Canon EOS 250D. And there isn't a huge image quality gap between the 800D and 250D.

This apparent walk on water is not a bad thing. A resolution of 24 megapixels is good for an APS-C sensor, as it offers a good balance of detail at low ISO and large enough photosites for cases where higher sensitivities are needed.

Therefore, it is not surprising that the two cameras have the same ISO range. Both have a native ISO range of 100 to 25,600, which can be extended to 51,200 when you need to take photos in a very dark environment and can support your images just not looking that good.

Shutter speeds on tap are the same too, at 1/4000 of a second up to 30 seconds, for when the light is very dim and your tripod extra sturdy. 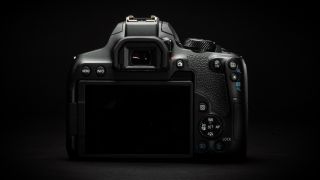 We are used to seeing what appear to be huge improvements to AF systems in mirrorless cameras as they are rooted in the sensor. But in the world of low-cost digital SLRs? Not so much.

Like its predecessor, the Canon EOS 850D / Rebel T8i has 45 cross-type AF points. It might seem low if you're more of a fan of mirrorless cameras, but focusing with them will be fast and accurate.

Canon claims the 850D is better in low-light focus, with locking using the center focus point at -4EV, compared to -3EV on the 800D.

There is a sharper difference when you enter Live View mode, using the LCD screen to compose. In both cameras, it is downgraded from the traditional phase detection AF system to a system based on the dual pixel autofocus sensor.

The Canon EOS 800D has a maximum of 49 focus points on the screen, with the 850D up to 143 points, depending on the shooting mode used. Of course, if you use Live View most of the time, a mirrorless camera like the Canon EOS M6 Mark II is probably worth looking at instead of a DSLR. 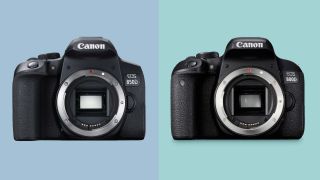 One of the most obvious advantages of the Canon EOS 850D / Rebel T8i is its shooting performance. It has a new Digic 8 processor, capable of burst speeds of up to 7fps. Or 7.5 frames per second using Live View.

The 7D's Digic 800 processor shoots up to 6 frames per second. While this update doesn't elevate the 850D to a new level of sports-style shooting, we'll take whatever boost we can get if it means capturing that perfect frame during fast action.

This new processor should also see some improvements for better ISO noise management. Judging from the Canon EOS 250D, a slight reduction in color noise is the most likely result in the real world.

The other core technology remains the same, the two cameras offer Wi-Fi, Bluetooth and NFC connectivity. They also use the same LP-E17 battery. But presumably thanks to the improved efficiency of some of the new gear, the EOS 850D is designed for up to 800 shots, compared to the 600D's 800D. (based on CIPA industry standard, in viewer mode). 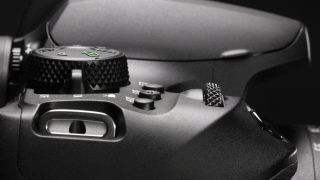 Shooting speed brought us the first major improvement from the Canon EOS 850D, but the video is the most important. It can shoot video at 4K resolution, while the 800D's highest capture mode is 1080p at 60 frames per second.

The 4D's 850K capture is at 24 or 25 frames per second, not 60, but that's exactly what we expect from a DSLR. And, like last time, the video mode can use five-axis digital stabilization for smoother footage.

Some bad news: When shooting 4K video, the focus is limited to contrast-based AF. Since this misses the phase detection of Canon's Dual Pixel AF system, you will likely see a focus search if you refocus.

Both cameras have a 3,5mm jack for an external microphone and a mini HDMI output. 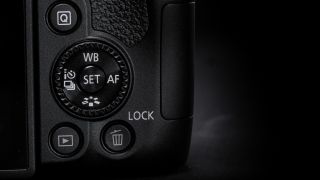 Of course, these days the EOS 800D can be found for around €200 / €200 less than its original cost online, so it is good value for money considering the proximity to its successor, at least in terms of specifications.

The Nikon D5600 is the obvious alternative, but, like the 800D, it is now quite old and does not have 4K video capture.

The Canon EOS 850D is the best buy for 4K video from a traditional DSLR manufacturer on a budget right now. But there are plenty of compelling competitors if you want to try a mirrorless camera. The Sony A6100 with a kit lens can be found for much less, as can the Canon EOS M50 compact camera. The Canon EOS 850D / Rebel T8i does enough to maintain the company's DSLR range today, adding 4K video. Other improvements, such as a slightly better blast speed and longer battery life, according to CIPA figures, are more like the gentile ones.

Affordable DSLRs may have lost momentum compared to the many mirrorless alternatives, but for now, this is the obvious choice if you want a DSLR with 4K video that is not prohibitive and takes advantage of traditional DSLR benefits, including handling and The battery life.